(Update:  it looks like this feature is imminent.  See blog article.)

EFS-Web has the feature “View last 40 eFiling Acknowledgement Receipts”.  Patentcenter needs to have this same feature.  I pointed this out to the USPTO in September of 2018 as an alpha tester of Patentcenter.

This is Feature Request FR4.

So here’s the feature request.  On the “success” page where Patentcenter says I have successfully e-filed something, can there please be a “deep link” that goes directly to the IFW screen for the particular patent application in which I just e-filed something?

I could then for example right-click on it and open a new page and I could see what the USPTO received from me.

This is Patentcenter feature request FR2.

USPTO will eventually shut down EFS-Web and the only patent e-filing system available to applicants will be Patentcenter.  So it behooves all of us to take the present opportunity to beta-test Patentcenter as fully as we can, to try to get USPTO to fix its defects and to try to get USPTO to make it user-friendly.  (Probably this means you should join the Patentcenter listserv.)  Here is a defect that I keep running into in Patentcenter, namely that the web-based Form 85B drops the initial capitalization for the city name for the assignee.  I reported this to the USPTO a year ago and it has still not been fixed.  But there are two other ways that this feature of Patentcenter is broken.  END_OF_DOCUMENT_TOKEN_TO_BE_REPLACED 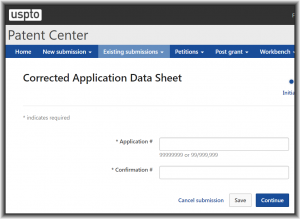 Patentcenter has a corresponding function (quoted at right).  But this Patentcenter function is broken — it loses things and does not tell you that it lost them. (There are also two other broken things about the Patentcenter Corrected ADS function as I will discuss below.)  Until USPTO fixes the software, you need to be extremely cautious if you decide to try using the Corrected ADS function in Patentcenter.  I will discuss it now in more detail, with some background from EFS-Web as well. END_OF_DOCUMENT_TOKEN_TO_BE_REPLACED

Is it a problem for you that some of the e-filing paths in Patentcenter finish with no “send email” button?  Please post a comment below.  (This is ticket number CP6.)

(Update:  See update at the end of the blog article.)

There’s a very important database at the USPTO called Supplemental Content or SCORE.  If you look up any particular patent application in PAIR or in Patentcenter, what gets listed for SCORE for that patent application should be absolutely identical.  But strikingly often, they are not at all identical.

For example here is a case that has three drawings files in SCORE according to PAIR, but according to Patentcenter this same case supposedly has nothing in SCORE.

I have dropped an email to ebc@uspto.gov with the application number, asking EBC to please open a ticket to get this fixed so that Patentcenter will show my SCORE files.

Update:  I posted this on a Sunday, yesterday.  The missing Score material included two files that I e-filed yesterday, as well as a file that had been in the case from more than a year earlier.  The screen shot above shows that the file from more than a year ago was missing in Score in Patentcenter as of yesterday.  About two hours after I posted this blog article, without any explanation from the USPTO, the Score file from a year ago suddenly for the first time became visible in Patencenter, along with the new newly e-filed files. 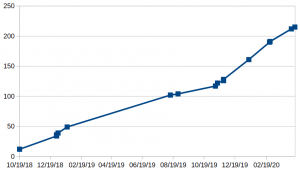 It looks as though it is possible to figure out how many utility patent applications have been filed in Patentcenter thus far during alpha testing and beta testing. END_OF_DOCUMENT_TOKEN_TO_BE_REPLACED

Until this week the Patentcenter system was in a controlled beta test, accessible to only a very limited number of beta testers.  This week USPTO made the choice to open the beta testing to everybody.  This week I also launched the Patentcenter listserv, an email discussion group for users of Patentcenter.  (To find out more or to subscribe, click here.)   Listserv members have already solved a coding error that USPTO made in Patentcenter in the display of reel and frame numbers.

Guess what you get if you add 17237 to 48299: 65536. That just can’t be a coincidence. I haven’t checked any of my cases, but I’ll bet they’re all like that, suggesting some weird piece of bad handling of a 16-bit integer value. How that could pass any level of testing of the code, I can’t imagine.

65536 is one of those really interesting numbers for a person who does a lot of computer programming.  It is 216.

Richard then looked up some of his own cases in PAIR and in Patentcenter, and here was his report:

I just confirmed my suspicion with two of my applications. The Patent Center reel number and the PAIR reel number always add up to 65536. That’s just hilariously broken.

At this point alert listserv member and experienced computer programmer Neil Ormos identified how USPTO can fix this coding mistake:

What a great catch! Someone at the PTO owes you a bug bounty!

That kind of error is fairly common. Someone writes the field as an unsigned int and then reads it back as a signed int, or uses sprintf(“%d”) when they should have used sprintf(“%u”). Happens all the time.

“Beta” testing is great, no? You just harness the customer as free labor, and they stand in line to volunteer!

So anyway the coding fix has now been posted here.  It will be interesting to see how many days it takes USPTO to correct the coding error in Patentcenter.  (This is trouble ticket number CP8, cleared May 12, 2020.)