Readers will recall my January 26 posting and my February 4 posting about the consequences of the decision on January 15 by the Swiss central bank to allow the Swiss Franc to rise to its natural level after over a year during which the bank had sought to cap the percentage difference between the Swiss Franc and the Euro.  The Swiss Franc jumped 15 to 20 to 30 percent relative to various other currencies.  I predicted that the International Bureau would seek to revise the “equivalent amounts” for the PCT international filing fee and other PCT fees payable to the International Bureau and would seek to make the revised fees effective much sooner than the usual delay of 3-4 months.  Now the new fees have been set and indeed they will take effect sooner than the usual delay.

END_OF_DOCUMENT_TOKEN_TO_BE_REPLACED

The weather reports for the Washington area call for “six to ten inches of snow” between now and noon on Tuesday.  So the USPTO will be formally closed on Tuesday, February 17.  This means that if you needed to file something on the 17th to satisfy some USPTO due date, it will be timely if filed on Wednesday the 18th.

END_OF_DOCUMENT_TOKEN_TO_BE_REPLACED

In a recent blog post I said that May 13, 2015 will be a big day, and one of the reasons it will be a big day is that design patents granted from applications filed on or after that day will enjoy a fifteen-year term.  This is a longer term than the fourteen years with which we are familiar.

In response, alert reader and patent practitioner Karen Oster asked about the many web articles that say that the effective date for the fifteen-year patent term was fourteen months ago on December 18, 2013.  Among them are:

END_OF_DOCUMENT_TOKEN_TO_BE_REPLACED

Here is a countdown to the date (May 13) when the US will belong to the Hague Agreement.

Just a reminder that the USPTO will be closed on Monday, February 16.  This is Washington’s Birthday* which is a federal holiday.

Anything that you might need to do by February 16 to satisfy some USPTO due date may be postponed until Tuesday, February 17 and will still be timely.

END_OF_DOCUMENT_TOKEN_TO_BE_REPLACED 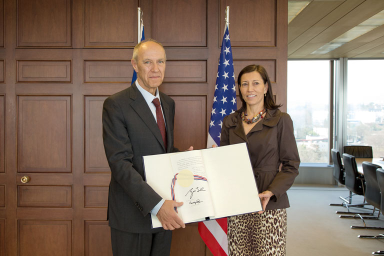 END_OF_DOCUMENT_TOKEN_TO_BE_REPLACED

Within our office we try to track our PPH cases pretty carefully. This prompted my recent blog postings here and here and here about the recent substantial worsening of the backlog within the USPTO in considering requests for PPH status.  After months of no progress USPTO has managed to grant a few of our long-pending PPH petitions, and so we have some hard data as just now bad the backlog is in recent weeks.

END_OF_DOCUMENT_TOKEN_TO_BE_REPLACED

Readers of this blog will recall that the Board of Directors of AIPLA adopted a resolution urging the USPTO to give substantial deference in a US national-phase application to the work done earlier by the USPTO in its role as International Searching Authority and International Preliminary Examining Authority.  AIPLA then wrote a letter to the USPTO about this.  I call this (not AIPLA’s terminology!) inviting the USPTO to “drink its own Champagne”.  I blogged about this.  What happened next?