I am indebted to Louis Ventre, Jr. for pointing out this delightful quotation from the US Supreme Court in 1892:

The specification and claims of a patent, particularly if the invention be at all complicated, constitute one of the most difficult legal instruments to draw with accuracy; and, in view of the fact that valuable inventions are often placed in the hands of inexperienced persons to prepare such specifications and claims, it is no matter of surprise that the latter frequently fail to describe with requisite certainty the exact invention of the patentee, and err either in claiming that which the patentee had not in fact invented, or in omitting some element which was a valuable or essential part of his actual invention.

Maybe it should be standard procedure to send a copy of this quotation to each client when they complain about the cost to get a patent application drafted.

Wow.  If you want to learn a new word now and again, hang out with the folks in the PCT Listserv.  Here’s a PCT Listserv posting of earlier today by list member Jim Boff:

I think you have said it all.

But you mention notarisation?

If you want it simple there has to be compromise everywhere on formalities, in the US as well as outside the US.

Note:  what seemed like an improvement at the USPTO regarding PPH petitions turned out to be illusory.  Please see a followup article about this. 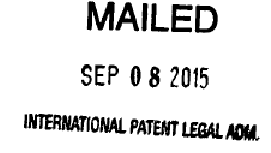 and there are many factors which might influence a particular filer’s choice of one approach or the other.  Now there is yet another factor, namely the speed with which a PPH petition might get granted.  If you pick “US national phase”, your PPH petition will nowadays likely get decided in a few days rather than a few months.  As I will describe below, a couple of weeks ago we filed about fifty PCT-PPH petitions, and we figured we would have to wait the usual four to seven months for USPTO to decide them.  We were astonished when seven of these fifty PCT-PPH petitions got decided in less than three weeks.  It turns out there is an easy explanation for this happy result. END_OF_DOCUMENT_TOKEN_TO_BE_REPLACED

When you e-file an image in a USPTO e-filing system, what often happens is that the USPTO mangles the image.  I will describe some of the thi

ngs that can go wrong and will give a few tips on minimizing the extent of the mangling. END_OF_DOCUMENT_TOKEN_TO_BE_REPLACED