The First Action Interview Pilot program (FAIP) is a way to try to get a patent faster.  For some applicants it may be smart to use FAIP. 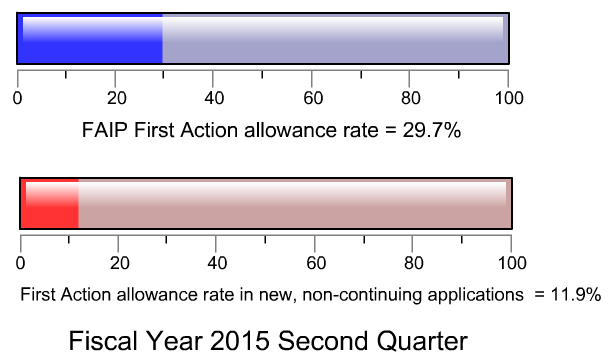 USPTO’s patent dashboard claims that the first office action allowance rate for FAIP cases is 30%, while the corresponding statistic for non-FAIP cases is 12%.  This suggests that an applicant might be smart to try FAIP.  In this blog post I will discuss some of the potential advantages and disadvantages of FAIP.   END_OF_DOCUMENT_TOKEN_TO_BE_REPLACED

Back in the early days of EFS-Web and Private PAIR, I could e-file a new patent application and within just a few minutes, I could look in IFW (Image File Wrapper) and see what the USPTO had received.  If there had been some problem, say an illegible drawing, then this would permit doing a corrective filing the same day.

And in those early days, if I were to e-file a follow-on document (for example a response to an office action), the newly filed document would be visible immediately in IFW.

All of this was consistent with USPTO’s stated performance standard for IFW which was (and is) that a newly e-filed document should be visible in IFW no later than one hour from when it was e-filed.

But not nowadays.  Very often, USPTO comes nowhere close to meeting its own stated performance standard.  I will describe some typical examples of performance failures for IFW.

END_OF_DOCUMENT_TOKEN_TO_BE_REPLACED

When EFS-Web was new, the USPTO tried to be smart about bibliographic (bib) data.  USPTO designed Form PTO/SB/14 which was an enormous (one megabyte) PDF form.  The user could paste the bib data into the form.  This included things such as “who are the inventors” and “what are their residences” and “what is the priority claim” and “what domestic benefit claim is being made to a provisional application”.  The form was entitled “Application Data Sheet” (ADS).

This was a lot of work for the user, but USPTO dangled a reward.  If the user were to include this ADS in the initial EFS-Web submission, the USPTO would promise to auto-load all of the bib data into Palm.  From there it would propagate into PAIR and it would be used in preparing the official Filing Receipt.  I will now describe how this reward gradually changed into a hoax.   END_OF_DOCUMENT_TOKEN_TO_BE_REPLACED

Sometimes a filer needs to update bibliographic (bib) data in a pending patent application.  In a recent blog post I talked about how USPTO’s preferred way of receiving requests for bib data changes is ill-conceived and wastes the valuable time of USPTO personnel and valuable time of the filer.  In that blog post I described how USPTO’s rules actually permit the use of a “smart procedure” in which the filer only lists the items being changed.  Items that are not being changed could be omitted in this “smart procedure”.  But the USPTO actually recommends that the “smart procedure” not be followed.

Having said all of this, the constructive thing to do is to describe how the USPTO could handle bib data changes better.  Which I will now do.   END_OF_DOCUMENT_TOKEN_TO_BE_REPLACED

About once a week in our office we find the need to update, change, or add bibliographic (bib) data in a pending patent application at the USPTO.  In general what we find is that the USPTO does not follow its own rules for such changes.  The USPTO’s procedures are ill-conceived, making poor use of the time of applicant and Office personnel alike.  In a later blog post I will describe what USPTO should do instead.  But for this blog post I will detail what the USPTO rules actually say about how to accomplish bib data changes, in the hope that this might be helpful to others.   END_OF_DOCUMENT_TOKEN_TO_BE_REPLACED

Yesterday USPTO released its Global Dossier public access system.  I blogged about this.  In that blog article I listed three design flaws in that system.  Today, having had a day to play with the system, I can describe something important that is missing from that system.   END_OF_DOCUMENT_TOKEN_TO_BE_REPLACED

In September of 2015 I posted a blog article celebrating some exciting news about PPH petitions.  In that article (“Unexpectedly fast PCT-PPH decisions at USPTO“) I noted that we had gotten some cases onto the Patent Prosecution Highway a mere three weeks after filing the PCT-PPH petition.  This was very good news given that previously it was taking anywhere from four to seven months for the Office of Patent Petitions to get around to examining PPH petitions.  The letters communicating the three-week grants of Highway status came from a different part of the USPTO (not the Office of Patent Petitions) namely the Office of International Patent Legal Administration (the former Office of PCT Legal Administration).

At our firm we use PPH a lot.  We try to track our PPH cases pretty closely.  When we saw this good news in September of 2015, we figured USPTO had gotten a clue and had changed its workflow so that PCT-PPH petitions were going to OIPLA instead of going to OPP.  And OIPLA was deciding such petitions fairly promptly after filing.

Well, it turns out I was wrong about this.   END_OF_DOCUMENT_TOKEN_TO_BE_REPLACED

Over on the EFS-Web listserv, a list member asked:

Here’s what I think about that:   END_OF_DOCUMENT_TOKEN_TO_BE_REPLACED

Weeks and months ago USPTO delivered webinars and other outre

aches in which it demonstrated the soon-to-be-functioning Global Dossier public access system.  Today the system got released.  You can see it here.  Its chief advantage for US filers will be that it will provide English-language access to information in the Japanese, Korean, and Chinese patent office databases.

I will explain a bit about how it works and what you can do with it.   END_OF_DOCUMENT_TOKEN_TO_BE_REPLACED