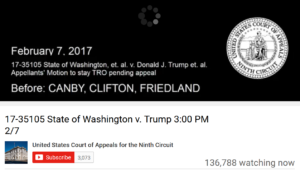 Today an important argument took place before the US Court of Appeals for the Ninth Circuit in San Francisco.  The Court made this hearing accessible to everyone across the US to many places outside the US, via Youtube.  As you can see on the screen shot, some 136000 people were watching the Youtube stream.  (I understand that the Youtube stream was further propagated to some millions of additional listeners by various media.)

It gave me pause to realize that I was but one among millions of people listening to the lawyers for the two sides, and listening to the judges.  Each of us perhaps finding this point more persuasive, that point less persuasive.  Hearing a judge asking a question of one of the lawyers, maybe we asked ourselves how we would have answered the question.  Maybe we compared the answer that we would have given with the answer that the lawyer actually gave.  Each of us participating, in our own small way, in the making of history today.

Maybe one reader of this blog favored one side in this appeal, and maybe another reader of this blog favored another side.  I don’t mean for this blog to be a place for arguing the merits of the appeal itself; there are many forums better suited to hosting such issues.  My point is that we live in a country with institutions, including the courts, that have survived for over two hundred years.  What I urge in this blog is for us to consider that it strengthens those institutions that across the US, and indeed in many countries around the world, anyone who wished to listen in on this appellate argument was able to do so.

The problem was that the pilot light in my boiler kept blowing out.  This blog article describes how I managed to fix that problem.  END_OF_DOCUMENT_TOKEN_TO_BE_REPLACED

If you sometimes use the Patent Cooperation Treaty, and if you have not yet joined the PCT Listserv, please let this blog post remind you that you may wish to join that listserv.  As a member of that listserv, you can be surrounded by the brightest PCT practitioners all around the world.  Today in the PCT Listserv, alert member William Slate asked some very good questions, the answers to which remind us of Best Practices to be followed when pursuing entry into the US national phase from a PCT application.  Mr. Slate asks:

371 cases.  A 371 case drops into the Examiner’s examination queue based upon the date upon which the applicant perfected entry into the US national phase.  In the majority of cases this will be the “30-month date”, that is, the date that is 30 months after the priority date.

Of course quite often the queue position is the 30-month date because the filer hands in the papers for US national-phase entry on the last possible date.  (Which might be due to procrastination on the part of the practitioner or on the part of the client.)

Such a failure “leaves money on the table” in at least two ways.  First, we all have this old-fashioned notion that the reason we exist as practitioners is to help a client get a patent.  And losing a few days (or a few weeks or months) in the examination queue means a probable delay in the eventual grant of a patent.

Second, the Patent Term Adjustment calculations, which are very complicated, sometimes count one of the time periods from the date upon which the application entered the Examiner’s queue.  So a failure to file an Express Request will sometimes lead to a loss of PTA that would otherwise have been granted.

The Filing Receipt in a 371 case will list a “filing or 371” date, and it is this date on the official Filing Receipt that will determine the place in the examination queue.

Bypass continuations.  In most patent offices around the world, there is only one path to patent protection from a PCT, namely entry into the national phase.  But alert listserv member William Slate correctly reminds us that in the US, there are two available paths for patent protection from a PCT.  One is the (very familiar) entry into the US national phase.  The other is the (not so often employed) “bypass continuation”.  There are many factors which might influence an applicant’s choice of one path or the other, factors the discussion of which can fill an entire hour of discussion during a PCT Seminar (see here and here and here) of a day or two’s duration.  But Mr. Slate draws our attention to one particular factor, namely where does the application fall in the Examiner’s examination queue, depending upon the practitioner’s choice of filing path?

We have already discussed where a US national phase (371) case falls in an Examiner’s queue.  The position in the queue is the 30-month date, unless the practitioner is savvy enough to file an Express Request (and to fulfill the other requirements such as fees and translations and the inventor’s oath or declaration).  But what about the bypass continuation?  What position does it earn in the Examiner’s queue?

Which then brings us to Mr. Slate’s sub-questions.

Does the IFD make a difference depending on whether we pick 371 or bypass?  No, the IFD (international filing date) does not play any part in the position in the examination queue in the USPTO.  Not for a 371 case, not for a bypass case.

Does the choice of RO make a difference depending on whether we pick 371 or bypass?  No, nothing about this is tied in any way to the particular Receiving Office (“RO”) which the applicant selected.  Picking RO/US rather than some other RO does not lead to an earlier position in the examination queue.  Not for a 371 case, not for a bypass case.

The applicant that is concerned about how quickly an application will get examined, then, will not be particularly slanted toward one path or the other (371 or bypass).  But as mentioned above, there are many other factors (other than examination queue position) that might influence the savvy filer’s choice of one path or the other.  Go to a PCT Seminar  (see here and here and here) to hear about this for an hour or so.

Getting ahead in the queue?   The applicant that is concerned about how quickly an application will get examined may wish to pay close attention to other initiatives that can make a big difference.  In our office the initiative that we use most often is the Patent Prosecution Highway.  The PCT applicant can arrange to receive a favorable Written Opinion from the International Searching Authority.  Or failing that, the PCT applicant can file a Demand and winkle a favorable International Preliminary Report on Patentability (under Chapter II of the PCT) from the International Preliminary Examining Authority.  Either of these accomplishments permits the PCT applicant to move to the very front of the line for examination in the USPTO, using the PPH.

Another initiative which some applicants pursue is Track I.  There are many pros and cons as between Track I on the one hand and PPH on the other hand, which will be the subject of a later blog posting here.

To summarize, so far as positioning in the USPTO Examiner’s examination queue is concerned, a well executed national phase entry or a well executed bypass continuation will end up in the same place in the queue.

Again, hats off to alert listserv member William Slate for reminding us of these important Best Practice issues.

When I check into a hotel or log in at a public wifi location, I sometimes do a “speed test”.  The goal of course is partly just to make sure that I have successfully logged in or have successfully entered an access code.  And to test to see how fast the Internet connection is.

I am tickled to be able to report that we at OPLF have set up a speed test which everyone can use.  The speed test, unfortunately, requires that your system has “Flash”.  Most smart phones and tablets do not have Flash.  So the speed test is generally available only for laptop and desktop computers.

Last week I blogged that I was astonished (in a nice way) to learn that the Schwegman firm will be providing in-person continuing legal education free of charge in a few weeks in San Jose, California.  Schwegman will actually be providing two days of free training — a first day about best practices for patent docketing, and a second day about the Patent Cooperation Treaty.  The patent docketing class will be all day on February 22 and the PCT class will be all day on February 23.

Schwegman is not, however, the only firm doing such nice things.  McDonnell Boehnen Hulbert & Berghoff LLP, perhaps better known as MBHB, has offered many free-of-charge continuing legal education webinars.  I have just now signed up to attend their most recently announced webinar, which will take place on February 22.  The title is Patent-Eligibility Update: Abstract Ideas in the Federal Circuit and USPTO.  To learn more about the webinar, or to sign up, click here.

Who would like to join me in complimenting Schwegman and MBHB in their public-spirited activities?  Post a comment below, and share this blog article with someone whom you know at each of the two firms.