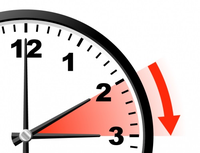 Keep in mind that Switzerland will turn off daylight saving time today.  Those who are filing documents at the International Bureau — documents that need a same-day filing date — should check to make sure they know what time it is in Switzerland as of today.

US filers who are getting ready to file a document at the IB should thus pay close attention during this next week to what time it is in Switzerland.

Today’s random blog posting is on the subject of enunciation. END_OF_DOCUMENT_TOKEN_TO_BE_REPLACED

What we are all accustomed to is that when we are picking a Receiving Office for the filing of a new PCT application, a substantial drawback of RO/IB is that we have to worry about the time zone.  For the US-based filer who is selecting between RO/US and RO/IB, the typical difference is six hours.  A filer in the Mountain Time Zone, for example, who is rushing to get a same-day filing date would need to e-file by 10PM if e-filing in RO/US but would typically need to e-file by 4PM if e-filing in RO/IB.

I have successfully obtained Certificates of Availability for design applications in two of these six Offices, namely China and the US.  You can see exemplary Certificates here:

It is delightful to attend the Design Patent Symposium 2018, sponsored by Banner & Witcoff, Ltd., Sterne, Kessler, Goldstein & Fox P.L.L.C., and George Washington University Law School. This symposium is taking place right now in the NEA building at 1201 16th Street NW, Washington, DC, having begun thus morning at 8:30 AM and continuing through the day to a reception ending at 6:00 PM.

It is a fascinating program (brochure here), with industrial designers, people from the USPTO, people from WIPO, and patent practitioners.  For those who were not able to attend, the presentation materials may be downloaded here.

The Patent Cooperation Treaty seminar which took place in Silicon Valley on October 16-18, 2018 went well, I think.  I enjoyed it and I think the attendees enjoyed it as well. END_OF_DOCUMENT_TOKEN_TO_BE_REPLACED

The European Patent Office has announced November 1, 2018 as the date that it will join the DAS system.  This brings all of the members of the IP5 to the DAS system, and it brings the number of participating Offices to nineteen.

END_OF_DOCUMENT_TOKEN_TO_BE_REPLACED

There’s a special opportunity to learn some advanced PCT in Manhattan on November 8.  Yours truly is the instructor.

The course is Patent Administration II: Building on a Solid Foundation, a sequel to Patent Resources Group’s trusted course for patent support professionals.  Early registration pricing is available through October 22.  For more information or to register, click here.

This course is intended for patent Support Professionals who have taken PRG’s Patent Administration:  A Foundation for Success course or who have at least 3 years’ experience. It is a four-day course and I will be teaching day 4, including these topics:

This program includes an office-by-office discussion of the various PCT Declarations such as declaration number 2 (entitlement to file) and declaration number 3 (entitlement to claim priority).  So far as I know, no PCT course has ever until now treated PCT Declarations in such detail.  This is a unique and first-time opportunity for patent support professionals to learn really advanced patent topics including really advanced PCT topics.

These days it is pretty interesting to keep track of the growth of the Hague Agreement (the international filing system for industrial designs).  Since a year ago there had been whispers (blog article October 21, 2017) that Mexico was going to join the Hague Agreement Real Soon Now.  And then came the new successor NAFTA agreement (see blog article of October 2, 2018) which sets forth that Mexico must join Hague by no later than the date of entry into force of the new NAFTA agreement.

Anyway just now I was delighted to hear from Rich Stockton, who is chair of the AIPLA Industrial Designs Committee, about this particular topic.  He reports that he met recently with some higher-up folks at the Mexican patent office.  They told him that they expect the Mexican legislature will approve the implementing legislation during the current session and that no other major legislative steps remain other than depositing the instrument of accession (and then waiting the requisite three months for the accession to take effect).

He thus tells me that it looks to him as though Mexico will officially join the Hague system in the first few months of 2019.

This is, of course welcome news, and the accession of Mexico to the Hague system will be a welcome development.

When you use a presentation screen at a hotel, you can pay a few hundred dollars a day to rent a projector from a hotel.  Or you can pay an A/V contractor to set up a projector.  What I realized when I was setting up my recent PCT Seminar in Redwood City, California is that you can buy a projector and a screen and throw them away at the end of the meeting and it costs less money than renting.

What I also learned is that there are some really nice projectors available nowadays, such as this Epson 1781W projector.  I’ve decided I will simply bring this projector with me every time I present at any meeting in the future.

What we are all accustomed to is having to bring our notebook computer with us to a meeting, finding the lectern, finding a fat cable, and connecting the cable to our computer.  The cable runs to the projector and has been duct-taped to the floor so that it is not a trip hazard.  The cable might be a VGA cable or it might be an HDMI cable.  Years ago the projector’s input was always VGA and the computer’s output was always VGA.  In more recent times more and more projectors do not have a VGA input;  instead the input is HDMI.  Some computers have an HDMI output.  More and more notebook computers do not have a video output at all and instead the user must bring along an adapter that adapts USB to the desired output such as VGA or HDMI.  In my experience there is only about a 50-50 chance that the adapter I brought with me to a meeting location (VGA or HDMI) will turn out to match the type of cable at the lectern.  (You would think I would always remember to bring both kinds of adapters.  Yeah right!)  The A/V contractors sometimes plan ahead and carry a full range of adapters that convert VGA to HDMI and HDMI to VGA and so on.  Of course what also happens is that the display screen image quality often suffers due to awkward interpolation conversions between the screen resolution of the source (the notebook computer) and the destination (the native resolution of the imaging device in the projector).

I have attended many a meeting where the first five or ten minutes of meeting time gets lost while everyone sits around as the presenter fumbles to try to get his or her computer to talk nicely with the cable and with the data projector.

What’s so nice about this Epson 1781W data projector?  Well, a bunch of things.  One thing is that it is thin and light compared with a lot of data projectors.  It weighs only about four pounds (about 1.8 kilograms).  It is only about 2.1 inches (about 5.3 centimeters) tall.

One thing to watch out for is that in most hotels, they set up the wifi so that any two devices connected to the hotel’s wifi are blocked from communicating with each other.  Any device that is connected to the hotel’s wifi is only permitted to connect to the Internet.  So the hotel wifi is no good for permitting this kind of data projector to connect to your computer.  So you have to use your own wifi hot spot or your own wifi router.

My personal favorite is the GL.iNet GL-AR750 travel router (at right) which is the size of a deck of playing cards and has every nice feature you could want in a wifi router, for a mere $45.  But there are many very nice travel routers these days that would be well suited to such a purpose.  This router is what I used with this projector for the recent PCT Seminar.

Oh and if you are stubborn and you actually want to use an HDMI cable with this Epson projector, you can.  The projector does have an HDMI port.  I just cannot imagine you would want to do this, since the other approaches are so much smarter.