Malaysia has joined the Madrid Protocol. The Protocol will enter into force for Malaysia on December 27, 2019.

Malaysia deposited its Instrument of Accession on September 27, 2019. This brings to 122 the number of members of the Madrid system.

Malaysia joined the PCT on August 16, 2006. If Malaysia were to join the Hague Agreement, it would then achieve the trifecta for international filing systems.

The two-letter code for Malaysia is “MY”.

I was on airplanes much of last week when this petition got filed and that is my excuse for missing it.  I have now had an opportunity to read the petition, filed by the Software Freedom Conservancy and signed by professional colleague Pamela Chestek.  I am in awe of the amount of work and wordsmithing that went into this petition, which is well written both as a legal document and as a get-your-attention plain-English document.  This petition communicates, much more clearly and directly than anything I have written (see blog article and blog article), the wrongheadedness and harmfulness of the recent rulemaking and drafting of examination guidelines by the Trademark Office at the USPTO relating to forcing applicants to reveal their domicile addresses.

My hope is that decisionmakers in the office of the Commissioner for Trademarks will read this petition and will take it to heart.

Executive summary:  I received a nice phone call from a high-up person in the office of the Commissioner for Trademarks at the USPTO about the post office box policy. END_OF_DOCUMENT_TOKEN_TO_BE_REPLACED 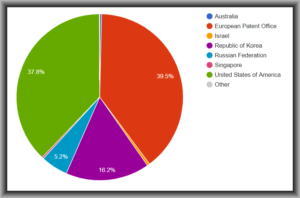 WIPO provides a very nice statistics lookup tool on its web site.  I used that tool to make this pie chart showing the International Searching Authorities that were chosen in 2018 by filers in RO/US. END_OF_DOCUMENT_TOKEN_TO_BE_REPLACED

In this blog article I said “Zelle cannot be used by a business”.  Recently, however, some banks that belong to Zelle, which is a money transfer service, have begun allowing businesses to use Zelle.  This article discusses this change. END_OF_DOCUMENT_TOKEN_TO_BE_REPLACED

For US filers, many International Searching Authority fees will change in the next few weeks.  END_OF_DOCUMENT_TOKEN_TO_BE_REPLACED

Today for the very first time I received an email from the MyUSPTO widget telling me that the status of one of my monitored files has changed.  This is really a big deal.

I am delighted to report that somebody at the USPTO has made some progress in getting the Patent Docket widget in the MyUSPTO system working.  As I say, today I actually received an an email notification that the status had changed in a case that I am monitoring in the widget.  Whoever you are at the USPTO, thank you!

I blogged about this system and how it did not work at all well over the past two years.  Now it seems to be working at least a little.

For readers, here is the encouraging news.  You might be able to start using the MyUSPTO Patent Docket widget as an adjunct to your other mechanisms for monitoring status of US patent applications.

END_OF_DOCUMENT_TOKEN_TO_BE_REPLACED

Readers will recall my blog articles here and here and here about Ohio State University’s ill-fated attempt to obtain a trademark registration for the word “the”.  Now there is an Office Action which you can see here.

As I predicted, the Examining Attorney refused registration because the specimens of use show the mark as “merely ornamental”.

And as I also predicted, the Examining Attorney also refused registration in view of the earlier trademark filing by clothing designer Marc Jacobs. END_OF_DOCUMENT_TOKEN_TO_BE_REPLACED

An earlier blog article discussed whether the USPTO will record an assignment of a PCT application even if it was filed in a Receiving Office other than RO/US (the answer is “yes”). In that article I also pointed out that if you are in possession of a signed assignment of a PCT application, you ought to record it within three months of when it was signed, and you ought not to postpone recordation until such time as the US national phase is entered (35 USC § 261).  This prompted a loyal reader to ask:

Would you record an assignment for a PCT case, even if it has been signed, say, 5 or 6 months ago? Way more than the three months during which it “should” have been recorded?

One of my clients does have a standing procedure according to which a PCT assignment is signed right after filing, however, the assignment is merely kept in the file and never submitted during the International Stage. Only if/when National Phase is entered, will said assignment be sent to the various associates for recordation. Some accept it, others want new ones anyway.

So, during the course of some “housekeeping” I came across several signed PCT assignments which had never been recorded. Should I submit them now, even the three months have long gone?

The answer is yes.

First, even if the practitioner has failed to follow Best Practice by recording within three months, there is still an enormous benefit to recording rather than failing to record.  Recordation, even if done tardy, still offers some of the benefits set forth in 35 USC § 261.  It will still, for example, trump a later-recorded assignment on many fact patterns.