Recently the USPTO opened up access to Patentcenter to all users.  (Previously it was open only to certain alpha and beta testers.)  This prompted me to set up a new listserv for Patentcenter users (to learn more or to subscribe, click here).  Alert listserv member Shannon Vieau raised a fascinating issue namely that the reel and frame numbers listed for recorded assignments in Patentcenter often do not match those listed for recorded assignments in PAIR.  Prompted by her listserv posting (thank you!) I looked up one of our cases where in PAIR it says what you see above.

Which one is correct?  The answer is, Patentcenter is wrong.  PAIR is correct.  Shannon reported this to the EBC today.  It will be interesting to see how long it takes for this to get fixed.

(Update:  it took more than six months from when we reported the bug, but USPTO did finally fix it.  See blog article.)

When you are e-filing a new utility patent application in EFS-Web, one of the ways to make the priority claim is by means of a web-based Application Data Sheet.  There’s a place in EFS-Web where you can say that you are adding a priority claim, and it gives you a drop-down menu of patent offices where your priority application might have been filed.

USPTO has had users alpha-testing and beta-testing its new system called Patentcenter, which will eventually replace EFS-Web.  Patentcenter has a similar web-based ADS function that allows you to make a priority claim when you are filing a new patent application.  When you use this function, eventually you reach this drop-down menu of patent offices where your priority application might have been filed.  Can you guess which well-known foreign patent office is missing from this drop-down list in Patentcenter? END_OF_DOCUMENT_TOKEN_TO_BE_REPLACED

New users of Patentcenter will learn soon enough that there is a way that Patentcenter breaks USPTO’s own rules.

If there’s anything that patent practitioners learn the hard way, it is that the USPTO systems ruin any PDF that contains color or gray scale when the PDF gets loaded into IFW.  I documented this back in 2006 as you can see here.  USPTO recognized this (EFS-Web guidelines) at least as long ago as 2008:

Text of other colors [other than black] may not convert to image properly, resulting in unreadable or invisible text.

So imagine how disappointing it is to see that the designers of Patentcenter have set it up so that every single form generated by Patentcenter for loading into IFW is filled with color and gray scale!  Which violates USPTO’s own rules for images to be e-filed in IFW. END_OF_DOCUMENT_TOKEN_TO_BE_REPLACED

Last Friday was a meeting of the Trademark Public Advisory Committee, and USPTO trademark management gave a presentation.  You can see the slide deck here.  Slide 15 is particularly interesting for those of us who have been worried about owner email addresses. END_OF_DOCUMENT_TOKEN_TO_BE_REPLACED

This observed drop is consistent with some slides that the USPTO trademark management presented to the Trademark Public Advisory Committee last Friday, as I will now discuss.  END_OF_DOCUMENT_TOKEN_TO_BE_REPLACED 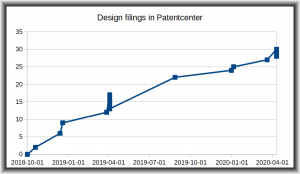 Are you using Patentcenter?  Are you planning to use Patentcenter now that it is open for all filers (blog article)?  If you have not already done so, you should join the Patentcenter listserv.  This is an email discussion group for users of USPTO’s Patentcenter system.  To join the listserv, click here.  END_OF_DOCUMENT_TOKEN_TO_BE_REPLACED

Until now, only certain filers were able to gain access to USPTO’s Patentcenter system.  To gain access, the filer had to be visiting from an IP address on a particular approved list.

To reach Patentcenter, go to this web page:  https://patentcenter.uspto.gov/.

What is Patentcenter?  Why do you care? END_OF_DOCUMENT_TOKEN_TO_BE_REPLACED

Today I am working on getting ready to file a PCT patent application and I am filing it in DOCX and it reminds me how wrong-headed USPTO’s approach is.  Folks, if you have not filed DOCX at the RO/IB, I invite you to try it so that you can see that there is a correct way to do DOCX.  It’s just that the USPTO does not do it that way. END_OF_DOCUMENT_TOKEN_TO_BE_REPLACED

These days everybody seems to use Zoom for videoconferencing.   But it is all over the news that Zoom has many privacy issues and security issues.  This has prompted tech writers to write articles such as The best alternatives to Zoom for videoconferencing.  Some of the alternatives cost a lot of money.  One of them requires that everyone be using Apple products.  One of them works only for two participants.  Most of the services pass the video and audio streams through a server controlled by the service provider and you do not know who might be eavesdropping on the streams.

And then there’s Jitsi, which is what I recommend.  Jitsi is open-source, and it is encrypted, and you can host it yourself.  Our firm recently set up our own Jitsi server.  So we can host our own Jitsi videoconferences at a cost per minute of zero and a cost per month of zero, and the connections are about as secure as any videoconference could possibly be.  But even if you use the public Jitsi server (“Jitsi Meet“), you are still far better off in terms of privacy and security than if you were to use Zoom.