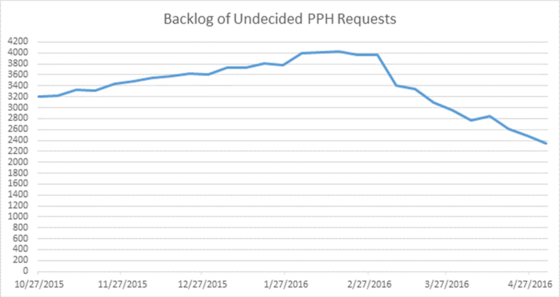 requests.  Here is the graph:

From a glance at this graph, one might have the impression that the problem at the USPTO had started in October of 2015.  In fact the problem dated from at least as early as November 2014, when I blogged about ever-increasing delays at the USPTO in granting PPH requests.  In April of 2015 I had faxed a letter to Director Lee about this growing backlog.

USPTO’s graph indicates a backlog of unattended-to PPH requests of about 3200 cases in October 2015, reaching a peak of about 4000 in February 2016, and a notable drop to around 2400 as of a few weeks ago.  (I note that our firm, all by itself, was responsible for something like 2% of all of these PPH cases.)

The interesting question is how this effort at the USPTO is working out nowadays for particular applicants.  We try to track these things pretty closely at our firm, and here is what we see.

As I say, I first reported this problem of a serious PPH backlog in November of 2014, some eighteen months ago.   It is very encouraging news that by now, in May of 2016, USPTO has made very good progress, having knocked the backlog down from some eight months to well under one month.

Kudos to USPTO for doing the right thing with PPH requests!

One thought on “USPTO does better with PPH requests lately”