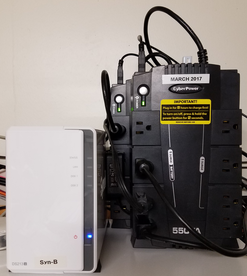 When I started my law firm (almost 25 years ago now), the connection from a UPS (uninterruptible power supply or “battery backup”) to a server was by means of a 9-pin RS-232 serial cable.  The signals were simple binary values — power fail, low battery, and UPS shutdown.

Nowadays the connection from a UPS to a server is smarter, as I will describe.
Pictured here is a Synology DS213J server and a CyCP550HG UPS.  The server draws a nominal 7 to 15 watts.  The battery in the UPS is a number 1250 (12 volt, 5 ampere-hours) sealed lead-acid battery.  From this we can work out that the capacity is at most about sixty watt-hours.  With reasonable guesses about inverter efficiency, we can guess that the UPS could conceivably power the server for at least a couple of hours.  But of course toward the end-of-of-charge the battery voltage would be down a bit from the nominal 12 volts.  (Note that this UPS has been labeled to indicate when its battery was placed into service.)  At our firm our routine is to replace lead-acid cells about once every five years. 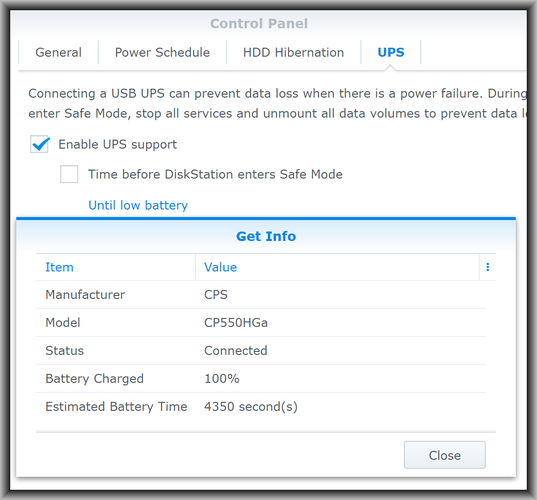 Nowadays the connection from a UPS to a server is by means of a USB cable.  A fairly rich protocol permits quite a bit of handshaking between the UPS and the server.  the screen shot (at right) above shows that the server has learned the name of the manufacturer (CyberPower Systems) and the model (CP550HGa).  At the time of this screen shot, the UPS reported that its battery was fully charged.

What’s particularly fun about this is that there is some sort of wattmeter or ammeter in the UPS, and the UPS measures how much power is being consumed.  Dividing this into the capacity of the battery permits the UPS to arrive at an estimate of how long the battery would last (in this case, 4350 seconds, or just over an hour).

In this server, “orderly power down” means that the server stops all running services in an orderly way and unmounts all data volumes (the RAID arrays).