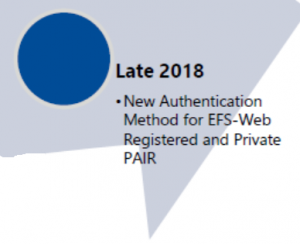 Those who make use of Private PAIR and EFS-Web are accustomed to USPTO’s very clunky way of accomplishing two-factor authentication, namely the poorly designed Entrust Java Applet (EJA).  USPTO has now formally announced (see excerpt at right from a slide in a USPTO webinar yesterday) that it will replace EJA with a much more user-friendly approach.  The goals of today’s blog article are:

First a reminder why it will be a great relief when EJA gets scrapped:

The new system.  The USPTO’s new system uses TOTP.  TOTP is an open-source, non-proprietary published algorithm designed by the very smart people in the IETF.  The idea of TOTP is that you install an app on your smart phone or on your notebook computer.  When the time comes to log in on a USPTO system, you type in your user ID and password.  Then (this is the important part) the USPTO web page asks for a Secret Code Number.  You open the app on your phone, and click the app to display your Secret Code Number.  You then type that number into the USPTO web page.  And now you have logged in using two factors, namely “something you have” (the Secret Code Number) and “something you know” (your password).

Many readers will already have such an app on their smart phone, for example to do two-factor logins for computer banking or at the WIPO ePCT system.  My app provides Secret Code Numbers so that I can two-factor logins for many systems, including the USPTO system, and Google, and Amazon, and Stripe (the credit card processor that our firm uses), and the admin interface for the WordPress system that hosts this very blog.

When I log in at MyUSPTO using two-factor authentication, I use WinAuth.

Here you can see the six-digit code that I used recently to log in at My USPTO.

What you can do right now to get ready.  Now we get to the important part of today’s blog article.  If you want to be trendy, modern, and up-to-date, you will do several things now to be ready for this transition that USPTO will carry out in “late 2018”.

Second, having already gotten yourself a user ID and password in the MyUSPTO system, get a TOTP app.  If you want to get a compliment from your IT person, go see him or her and ask them which TOTP app they recommend.  They will be delighted that you even asked this question and they will be glad to expound at some length about the advantages and disadvantages of the various TOTP apps.  They might settle upon Authy or Google Authenticator or Winauth or maybe their favorite is a different one.  Post a comment below about the recommendation that you received from your IT person!

Or maybe you already have a TOTP app on your smart phone or notebook computer.  If so, good for you for being trendy, modern, and up-to-date! 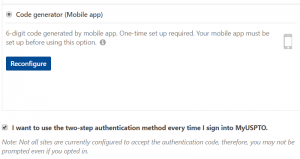 Third, synchronize your TOTP app with the MyUSPTO system.  To do this, click around in the “my account” section of My USPTO and find the section for “two-step authentication” (see screen shots at right).  Click the button for “Code generator (Mobile app)” and follow the steps to synchronize the MyUSPTO system with your app. 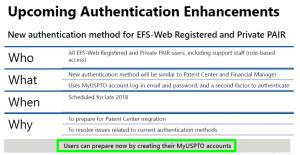 Having done all of these things, you and your co-workers will be very well positioned for the transition that will happen in “late 2018”.  When USPTO makes the change so that you must migrate from the EJA to the New Authentication Method, you will be ready for it.  Quoted at right is slide 35 from yesterday’s USPTO slide presentation.  You can see where it says “Users can prepare now by creating their MyUSPTO accounts”.  I have highlighted this in green.  Yes, as this slide from the USPTO recommends, users should prepare now by creating their own MyUSPTO accounts.  (And they should set up TOTP for their MyUSPTO accounts.)

Many good things will flow from your efforts.

As a first example, maybe you have been dragging your feet when you were repeatedly nudged by Amazon or Google or your bank that it would be a good idea to implement TOTP for your logins.  If you start getting familiar with a TOTP app because of your efforts with MyUSPTO, this will get you accustomed to the spiffy TOTP app that you will have installed on your smart phone or notebook computer.  You will then be able to turn on two-factor authentication for your bank, and you will greatly reduce the risk of a bad person hacking your computer banking and cleaning out your bank account.

As a third example, imagine that you might be in some conversation with a client who mentions casually that they are implementing TOTP in their latest consumer product or their latest software-as-a-service.  And you can casually ask which app they prefer for TOTP.  Then you and the client can compare the aesthetics and functionality of this TOTP app and that TOTP app, and you will have gained some geek stature in the mind of your client.

A fourth important reason for you to do this TOTP stuff in MyUSPTO is to send a subtle but potent signal to the USPTO that they are doing the right thing by making these baby steps toward scrapping the EJA.  Every month some project manager at the USPTO (I think I know who it is!) will get a report on their desk that adds up how many users have implemented TOTP in their MyUSPTO account.  Right now I suspect the number is very small, fewer than ten.  But hopefully the readers of this blog will all invest the five or ten minutes, and the fifteen or so mouse clicks, required to carry out the three steps mentioned above.  And hopefully the readers of this blog will coordinate with their co-workers to carry out the fourth step mentioned above.  And hopefully the monthly TOTP report on this person’s desk will show a bigger number next month and a still bigger number the month after that.

To reinforce this point, consider that there are surely some decisionmakers at USPTO who dread the scrapping of the EJA, since the transition away from EJA will inevitably lead to a deluge of frantic telephone calls to the EBC from people who suddenly discover they cannot log in to Private PAIR and EFS-Web any more.  If more people get TOTP configured now, if the numbers in the monthly report get bigger, then hopefully this dread can be reduced at least a little.

« Netherlands joins DAS!
See if you can pass a simple quiz on the DAS system »