When you use a presentation screen at a hotel, you can pay a few hundred dollars a day to rent a projector from a hotel.  Or you can pay an A/V contractor to set up a projector.  What I realized when I was setting up my recent PCT Seminar in Redwood City, California is that you can buy a projector and a screen and throw them away at the end of the meeting and it costs less money than renting.

What I also learned is that there are some really nice projectors available nowadays, such as this Epson 1781W projector.  I’ve decided I will simply bring this projector with me every time I present at any meeting in the future.

What we are all accustomed to is having to bring our notebook computer with us to a meeting, finding the lectern, finding a fat cable, and connecting the cable to our computer.  The cable runs to the projector and has been duct-taped to the floor so that it is not a trip hazard.  The cable might be a VGA cable or it might be an HDMI cable.  Years ago the projector’s input was always VGA and the computer’s output was always VGA.  In more recent times more and more projectors do not have a VGA input;  instead the input is HDMI.  Some computers have an HDMI output.  More and more notebook computers do not have a video output at all and instead the user must bring along an adapter that adapts USB to the desired output such as VGA or HDMI.  In my experience there is only about a 50-50 chance that the adapter I brought with me to a meeting location (VGA or HDMI) will turn out to match the type of cable at the lectern.  (You would think I would always remember to bring both kinds of adapters.  Yeah right!)  The A/V contractors sometimes plan ahead and carry a full range of adapters that convert VGA to HDMI and HDMI to VGA and so on.  Of course what also happens is that the display screen image quality often suffers due to awkward interpolation conversions between the screen resolution of the source (the notebook computer) and the destination (the native resolution of the imaging device in the projector).

I have attended many a meeting where the first five or ten minutes of meeting time gets lost while everyone sits around as the presenter fumbles to try to get his or her computer to talk nicely with the cable and with the data projector.

What’s so nice about this Epson 1781W data projector?  Well, a bunch of things.  One thing is that it is thin and light compared with a lot of data projectors.  It weighs only about four pounds (about 1.8 kilograms).  It is only about 2.1 inches (about 5.3 centimeters) tall. 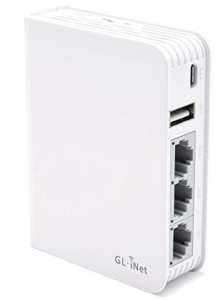 One thing to watch out for is that in most hotels, they set up the wifi so that any two devices connected to the hotel’s wifi are blocked from communicating with each other.  Any device that is connected to the hotel’s wifi is only permitted to connect to the Internet.  So the hotel wifi is no good for permitting this kind of data projector to connect to your computer.  So you have to use your own wifi hot spot or your own wifi router.

My personal favorite is the GL.iNet GL-AR750 travel router (at right) which is the size of a deck of playing cards and has every nice feature you could want in a wifi router, for a mere $45.  But there are many very nice travel routers these days that would be well suited to such a purpose.  This router is what I used with this projector for the recent PCT Seminar.

Oh and if you are stubborn and you actually want to use an HDMI cable with this Epson projector, you can.  The projector does have an HDMI port.  I just cannot imagine you would want to do this, since the other approaches are so much smarter.