(It will be appreciated that while CRISPR (Wikipedia article) is an acronym, SAOSIT (blog post) is not.  SAOSIT is a mere initialism (blog post).)

It is easy enough to see just what went wrong in the filing of this PCT application and its priority applications.  As you can see from the Patentscope page, the applicant in the PCT application was:

The PCT application claimed priority from twelve US provisional applications: 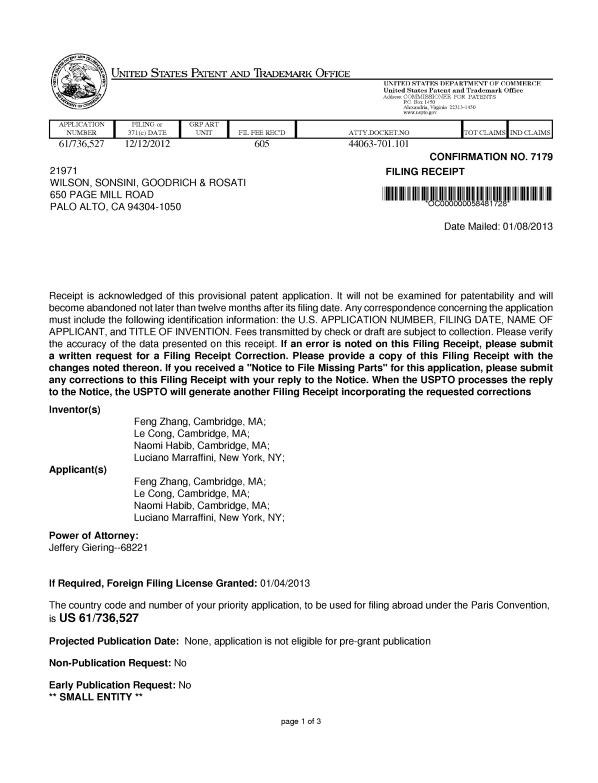 The petition did not get acted upon at the USPTO until May 12, 2014.  So the question of who exactly the applicants were on the day that EPO cares about (December 12, 2013) might be a bit fuzzy — maybe four applicants, maybe eight.

But regardless of whether on December 12, 2013 the number of applicants was four or eight, this would not have had to be fatal to the priority claim.  While the simplest way to perfect the priority claim is to have the same applicant in the second application as in the first, Article 4 also says that in the second application you can use the “successor in title” as the applicant.

The EPO takes the position that for this to work, the clean-up paperwork to satisfy the “successor in title” condition needs to have been executed chronologically prior to the filing of the second application.  Here that would mean the signing of assignments from these four inventors (or maybe these eight inventors) over to the three entities prior to December 12, 2013.  From Public PAIR, we can click on the Assignments tab.  We see that forty-one assignment recordations have taken place on this provisional application.  Thirty-two of the recordations recite an execution date of December 10, 2013.  Two more recordations recite an execution date of December 12, 2013.   It is clear that there was a flurry of assignment clean-up work being done to try to satisfy SAOSIT.

You can click through and look at the documents one by one.  No document with an execution date on or before December 12, 2013 was to Harvard.  Some of the documents list an assignee of The Rockefeller University.

So in the EPO, was SAOSIT satisfied for this priority claim?  You can look in the EPR file, and you will perhaps be bemused to see that the application file for the European application by now contains one thousand nine hundred ninety-nine documents amounting to forty-six thousand twenty-eight pages.  The application file is so thick because several third parties had asked the EPO to revoke the granted European patent.  They argued that the filer of the PCT application had failed to satisfy SAOSIT, and that for this reason the priority claims were invalid, and that for this reason some intervening prior art had to be taken into account in working out the novelty of the invention.

The third parties prevailed, and the patent owner lost.  You can see EPO’s January 17, 2020 announcement here.

A chief lesson is that the Best Practice is simply to use an ADS to identify the non-inventor applicant that matches the applicant that will be listed in the second application (for example a PCT application).

« Norway is now as trendy, modern and up-to-date as Australia
Our improved speed test »

6 thoughts on “SAOSIT and CRISPR in the News”