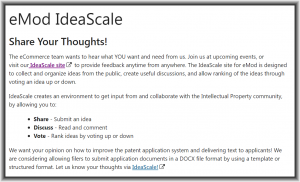 So of course one of the contributions of the alpha testers in summer of 2018 was that they noticed right away some of the important features of EFS-Web and Private PAIR that were missing from Patentcenter.  One example among dozens of others is “last forty acknowledgment receipts”.

Another contribution of the alpha testers was that they noticed programming errors, flaws, and bugs in Patentcenter.

Many of the alpha testers were active users not only of USPTO’s systems but also of systems at other patent offices, and so were in a position to see examples of what other patent offices had gotten right and that USPTO had gotten wrong in its design of EFS-Web and in Private PAIR.  Over and over again what an alpha tester of Patentcenter would encounter is some aspect of the ePCT system, for example, that was ideally designed from the user point of view and that in EFS-Web or in PAIR was poorly designed.  Of course the natural reaction of the alpha tester was to hope that by communicating the “ideal design” to the USPTO early in the Patentcenter development process, the USPTO could avoid repeating the earlier design mistake and could get it right in Patentcenter.

By September of 2018 the list of missing features, bugs, and design mistakes had gotten quite long.  Many of the problems with Patentcenter were the kinds of problems that could be fairly easily communicated in words, and in relatively few words.  “Where are the last forty ack receipts?” was easy to communicate.  Other design mistakes in Patentcenter were the kinds of mistakes that can only be clearly communicated by live demonstrations.  For example in the summer of 2018, the alpha testers kept running into this sort of problem:

As you will appreciate, it is not easy to communicate this in words.  The right way to communicate this to the developer of the software is by means of a shared desktop.  The alpha user can share his or her desktop, and the participants can all watch as the e-filing process clicks through the several screens.  And then when the process smashes into the brick wall after the filer clicks the “submit” button, everybody can clearly see what needs to be fixed.

Which is why, in the summer of 2018, I organized a Gotomeeting for the developers of Patentcenter.  This was set for noon Eastern Time on Friday, September 21, 2018.  I invited some of the alpha testers and I invited the USPTO people in charge of Patentcenter development.  The agenda was that we alpha testers were going to share our desktops and demonstrate for the USPTO people some of the click-path design mistakes in Patentcenter.

The appointed time arrived.  Alpha testers from the East Coast, from the West Coast, from Chicago, and from the mountains of Colorado were all logged in.  We all had our USB headsets on and we were really looking forward to the opportunity to help the USPTO folks in charge of Patentcenter accomplish some of their alpha-testing goals.

After a quarter of an hour, we gave up, puzzled.

We rescheduled the Gotomeeting for Thursday, October 11, 2018.  Again the invitations went out.  The attendees were to be the USPTO developers and some of the alpha testers.  The day before the meeting, an email arrived letting us know that no, the USPTO people regretted to inform us they would be unable to make time for the Gotomeeting.

We continued our alpha testing.  A few days later, an unsigned email came out from the USPTO to all of the alpha testers, informing us that there would be an online meeting a few days hence.  The email provided a URL for logging in.  Our feedback was very valuable, the email said.  The day arrived, and we all logged in.

What eventually happened is that the USPTO developers told the alpha testers that their very valuable feedback should be provided to the USPTO by means of USPTO’s Ideascale system.

Ideascale was, and is, a noble experiment.  Unfortunately it is a noble experiment that failed.  The idea of Ideascale is that participants in some group activity can post … wait for it … ideas!  And then participants can “vote” to indicate which ideas are good ideas.  This then permits … in this case … the Patentcenter developers at the USPTO … to see which ideas are the good ideas and then the USPTO can implement those ideas.

Likewise if an alpha tester were to identify some feature that was missing from Patentcenter (think of the “last forty ack receipts”) the alpha tester could post this feature request as an “idea” in Ideascale.  Other alpha testers, if they were to feel that this feature was actually needed, could click the “plus” button.

Given that by autumn of 2018 the USPTO developers had made it very clear that they were never going to show up for a Gotomeeting, and were never going to answer emails, and were only going to permit the use of Ideascale as the sole mechanism for alpha tester contributions, the alpha testers all set to work methodically posting “idea” after “idea” in the system.  Many hundreds of “ideas” got posted.  Many hundreds of “plus” buttons got clicked.

By January of 2019 I had achieved the honor of being awarded some nine “badges” in USPTO’s Ideascale system, the most prestigious of which was the “Occupier” badge (blog article).  What this means is that I had been logged in on Ideascale more than any other user.  I am not making this up!  Go to the blog article and see the screen shots that prove this.  Other badges that USPTO had awarded to me in this system were the Candidate badge, the Warhol badge, the Judge badge, the Apprentice badge, the Marconi badge, and the Team Player badge.

Back then I was still sipping the Ideascale Koolaid and I concluded that blog article with a suggestion that users of EFS-Web and PAIR and Patentcenter ought to participate in Ideascale so as to promote the shared goals of the USPTO and its customers.

My reaction in spring of 2020 was that Patentcenter was still not ready for prime time.  Features that had been missing in summer of 2018, such as the Last Forty Ack Receipts, were still missing in spring of 2020.  The click-path design mistake that if you had somehow overlooked the need to provide a document description for an uploaded PDF, Patentcenter would wait until three screens later and then spring it on you only when you click “submit” … which had been a problem in summer of 2018, was still a problem in spring of 2020.

I also figured it would be interesting to see the extent to which the “plus” voting mechanism had delivered on its promise.  When a large number of alpha testers all clicked “plus” on some needed feature, did USPTO developers add the feature?

If your ideas were posted in the Patent Center Alpha campaign, those items have been archived but we as moderators still have access to them. We want to thank you for submitting your ideas. We value each idea and regularly review them for consideration.

Yeah, right.  So I filed a FOIA request, asking for all of my Patent Center Alpha postings.  USPTO provided a response letter and a nearly unusable 55-page PDF.  Here is what I found on a quick look through the 55-page PDF:

Here is what one beta user of Patentcenter said recently about Ideascale:

… asking us to continue using broken ways of reporting things just doesn’t make sense anymore. There are two big problems. One of the problems with things like Ideascale is … that the issues we report aren’t getting fixed. But the other big problem is that Ideascale and its ilk are black holes: whether the suggestion is brilliant or idiotic or is voted up or down by Ideascale users, there’s never any feedback from the developers that lets anyone know they’ve even looked at the suggestion. If they would do something as simple as responding “we like that idea, and will put it on our to-do list” or “we will not make that change” (preferably with reasons why) that would be better than the nothing we see now. Human nature being what it is, people tend to stop reporting things if they get no response to those reports.

And another beta user reported this:

Bit late to the game here, but I can actually confirm that I have had one (1) IdeaScale submission implemented! It just… got un-implemented not long thereafter. I went back to look for the idea(s) I’ve submitted in IdeaScale to check the dates, and it looks like they deleted or hid most of the previous campaigns, which is its own flavor of interesting, but I was able to get dates for my (the?) one implemented idea from my email records and old filing receipts.

Putting the best face on it, the USPTO’s Ideascale project was a noble experiment, albeit a failed experiment.  It never fulfilled its promise.  It is a place where good ideas go to die.