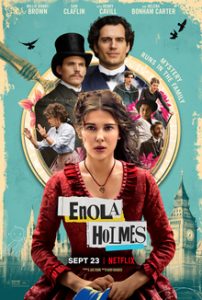 Can the heirs to Sir Arthur Conan Doyle shut down a soon-to-be-released Netflix movie Enola Holmes by asserting copyright?  The answer, it seems, turns on whether “having emotions” is a thing that copyright can protect.  No, I am not making this up.

But the heirs have gradually seen their arsenal of legal weapons diminish as years pass and copyrights expire.  When Netflix announced its imminent release of Enola Holmes (Wikipedia article), its heirs had very few weapons left.  As you can read here, back in 2014 a US court ruled that the Sherlock Holmes stories dating before 1923 had fallen into the public domain.  This meant that when the heirs recently decided to run down to the courthouse to try to block the Enola Holmes movie, they had to grasp at straws (or so it appears to me).  The heirs had to scour the handful of remaining stories (dating from 1923 to 1927) in which copyright had not yet expired, to try to identify copyrightable subject matter that had supposedly been improperly copied by the Netflix folks in the movie.  But it could not be any old copyrightable subject matter.  It had to be subject matter that was contained in one or more of those remaining stories, but that had not been published in any of the pre-1923 stories.

Suppose Sherlock’s third cousin Hemlock had been mentioned only in a 1924 story, and in no earlier story, and suppose Netflix had made the blunder of mentioning dear old third cousin Hemlock in some passing dialogue in the film?  This might have supported a cause of action arising out of copyright.  But that’s not what the heirs settled upon as they decided what to put into their complaint (which you can read here).  What they settled upon, and I am not making this up, is that in the movie, Sherlock “has emotions”.  And apparently the heirs feel that “having emotions” is the sort of thing that copyright can protect about a character.  And apparently “having emotions” is something about Sherlock Holmes that changed in 1923.  I certainly did not know this about Sherlock Holmes.

Here is a favorable review of the movie, which will be available beginning on Wednesday, September 23, 2020.  I am looking forward to watching the movie.

Maybe there are some very devoted Sherlock Holmes fans among the readers of this blog who can shed a bit of light on this.  Is it really true that Holmes did not “have emotions” prior to 1923?  Please post a comment below.

One thought on “Does copyright protect the notion that a character develops emotions?”