The USPTO makes much of the importance of receiving information in computer-readable formats.  For example the USPTO has proposed to charge a $400 penalty to the patent applicant who would fail to provide the body of a patent application in Microsoft Word format.  Why, then, does the USPTO so consistently fail to practice what it preaches?  For example when the applicant provides issue-fee information (assignee name and attorney-agent-or-firm information) in computer-readable format, the USPTO discards the provided computer-readable characters and hand-keys it, often making mistakes (keying “Radom, Poland” as “Random, Poland” or keying my name “Oppedahl” as “Oppendahl”).  The most recent glaring example of this has revealed itself in USPTO’s mishandling of incoming designations from international design applications, as I will describe. (These are the applications having application numbers in the series code “35”.) END_OF_DOCUMENT_TOKEN_TO_BE_REPLACED 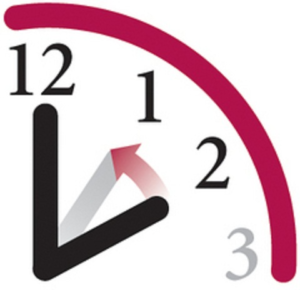 On October 25 I blogged that US filers filing documents at the International Bureau needed to pay extra close attention to what time it is in Switzerland.  The reason is that in Switzerland, Daylight Saving Time stopped happening on October 25.  But did not happen on that day in the US. END_OF_DOCUMENT_TOKEN_TO_BE_REPLACED

Here’s a fun thing to notice.  These days the USPTO is picking up an extra $27 from the IB with each inbound Hague designation. END_OF_DOCUMENT_TOKEN_TO_BE_REPLACED

It’s that time of year again.  The time of year when it is important to keep track of the fact that Daylight Saving Time is different in Switzerland from the way it is in the United States.  This is important because you might be in the US, and you might be e-filing (or fax-filing) some document with the International Bureau of WIPO.  END_OF_DOCUMENT_TOKEN_TO_BE_REPLACED

It is recalled (see blog post “Captain May I?” in Hague Agreement applications, August 20, 2020 and open letter to the Commissioner for Patents, September 2, 2020) that in about June of 2020 the USPTO came up with the notion that there was a trap for the unwary in the use of DAS as a way to perfect a priority claim in a US designation from a Hague Agreement design application.  The USPTO decided that I had supposedly stepped into this trap twice, representing a design applicant in two 35-series design patent applications.

I request that the Commissioner for Patents publish an Official Gazette notice along the lines of the proposed notice appearing below. END_OF_DOCUMENT_TOKEN_TO_BE_REPLACED

The childhood game of “Captain May I?” (Wikipedia article) irritated me greatly as a child.  I had little patience for it.  The premise of the game is that words do not mean what they seem to mean.  In this game, a string of words which on its face is an instruction to take three steps forward does not actually count as an instruction to take three steps forward unless it is followed up by the query “Captain May I?” which is in turn followed by an automatic grant of permission by the “captain”.  The conceit of the game is that any and all requests to the captain for such permission are automatically granted, so that after a few minutes of play one sort of assumes that because the requests are always granted, there should not really be a need to ask.  But the “gotcha” in the game is that you must ask, even though the asking is pointless.

Today I was gobsmacked to learn that the USPTO plays “Captain May I?” with US designations of Hague Agreement applications (international design applications).  If as a child you were to get tricked and forget to ask “Captain May I?” the consequences would merely be that you return to the starting line of the game.  But as a design applicant if you get tricked and forget to ask “USPTO May I?” the consequence is, it seems, that you lose your priority claim.  I am not making this up.  END_OF_DOCUMENT_TOKEN_TO_BE_REPLACED 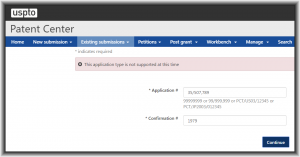 I was quite surprised today to be reminded that a defect in Patentcenter that I had reported to the USPTO back in December of 2019 has still not been corrected.  The defect is that it is impossible, in Patentcenter, to e-file any follow-on submission in any 35-series design patent application.  You can see this in the screen shot at right.  END_OF_DOCUMENT_TOKEN_TO_BE_REPLACED

On March 8 I blogged that US filers filing documents at the International Bureau needed to pay extra close attention to what time it is in Switzerland.  The reason is that in the US, Daylight Saving Time happened on March 8.  But did not happen on that day in Switzerland.  This meant that for the past three weeks, a US-based filer in (for example) the Mountain Time zone would be able to e-file in the IB as late as 5PM and still get a same-day filing date.  This differed from the usual drop-dead time of 4PM.

Today (March 29, 2020) is the day that Daylight Saving Time happens in Switzerland. END_OF_DOCUMENT_TOKEN_TO_BE_REPLACED