Used to be that to accept credit cards, a business had no choice but to open a “merchant account” through a bank.  The merchant account had a monthly service fee of at least $30 and required purchase of a card reader costing $500 or more.

A couple of years ago, startup Square offered a new way that a business could process credit card payments.  An inexpensive card swipe reader would plug into the user’s smart phone.  With no monthly service fee and no signup fee, Square became very popular among small businesses.  Close on its heels, Paypal launched its own very similar service.  Then a year ago, Amazon decided to take over the market with its Amazon Local Register service.  Amazon promised a smaller commission (a mere 1.75% compared with 2.5 to 2.7% for Square and Paypal) and backed the system with its well-known brand name and market clout.

Then October of 2015 kept getting closer and closer, and this was important because in October of 2015, there was going to be a “liability shift” in which a merchant would have to absorb the losses from credit card fraud if the store failed to use the “chip” in a credit card.  Square sent out new card readers to its users, card readers that could read a chip as well as swipe a magnetic stripe.  And Paypal rolled out a super-sophisticated card reader that would read a chip, swipe a card, or even accept a contactless payment such as Android Pay or Apple Pay (and that cost $150).  Industry watchers watched Amazon to see what it would do for its users of Local Register.  Would Amazon mail out small and inexpensive chip card readers to its users as Square had done?  Would it invite its users to purchase super-sophisticated $150 readers as Paypal had done?  Or would it move to the head of the pack by rewarding its loyal customers with free-of-charge super-sophisticated card readers?

I was astonished to learn today that Amazon has given up.  It will not do anything to make it possible for its users to read chip cards.  Amazon stopped signing up new Local Register accounts today, and users with existing accounts will only be able to use them until February 1, 2016.  Amazon is abandoning the merchant credit card processing business.

What should existing users of Amazon Local Register do about this?

If you are an Amazon Local Register user, maybe you already have a printer for printing credit card receipts 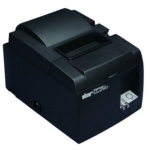 , namely a Star Micronics printer (photo at right).  If so, then you might want to migrate to Paypal’s competing service, because it is compatible with those printers.

If you do migrate to Paypal, this offers an opportunity to accept contactless payments (the above-mentioned Android Pay and Apple Pay) in addition to reading chip cards and swiping old-style magnetic stripe cards. 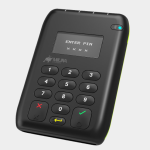 Paypal has an own-branded version of the Miura M010 card reader (right).  This reader is by now a mature technology, having been in use in the UK for well over a year.

The other sensible choice would be to migrate to Square’s credit card processing service.

« Why it costs money to record a trademark assignment at USPTO?
Spoke too soon — USPTO did not get it right »