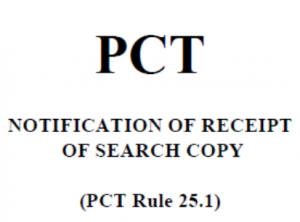 One thing that happens, after you file a PCT patent application, is that Form PCT/ISA/202 arrives.  (Or fails to arrive.)  Why do we care about Form PCT/ISA/202?  I offer some thoughts here.

The main reason why Form PCT/ISA/202 came into existence is the workflow for a newly filed PCT application.  A newly filed PCT application will have just been filed at a Receiving Office (“RO”).  The RO carries out a review of matters as to form (are the pages right-side up?  were the correct fees paid?) and then makes two copies of the application.  One copy (the “Record Copy”) gets sent to WIPO in Geneva.  The other copy (the “Search Copy”) gets sent to — yes you guessed it! — the International Searching Authority (“ISA”).

The fact that the middle three characters of “PCT/ISA/202” are “ISA” tells us that the form has something to do with the ISA.  And in this particular case, the form is the ISA’s way of fessing up that yes, it has received the Search Copy, and that it received it on some particular date.

So, nominally, one could imagine a client that wants very much to know just exactly on what date did the ISA receive the Search Copy.  For such a client, this document is exactly the right thing.  It answers this question.

I will say that for most clients that I have served over many years, the client would neither know nor care what date this event happened.  If I were to go to the trouble to send a reporting letter “Dear client, the ISA received the search copy on blah date” the client would file the letter and give it no attention.

Which brings us to a first important significance of Form PCT/ISA/202.  The first important significance is rather like that of the dog that did not bark in the night.  The point is that when one files a PCT application in the first place, one should be docketing to check to make sure that Form PCT/ISA/202 actually arrives.  The point is not so much that we might care what date is stated in the Form.  The point is to try to keep on top of things so that if the Form were to fail to arrive, we would notice.

We usually docket six weeks for this Form.  The Form usually shows up in about three weeks, in our experience, at least for our clients who pick Korea as the ISA (which is most of our clients).

Wouldn’t it be nice if there were some way that some element of the PCT system were to make it super-easy for the practitioner to check up on this?  For example suppose there were a way to go to ePCT and, with a mouse click or two, generate a report listing all of the pending PCT applications in your portfolio that had not yet received a Form PCT/ISA/202?

Well I am here to tell you that ePCT does provide such a feature.  With a couple of mouse clicks, you can generate a report listing all of the pending PCT applications in your portfolio that have not yet received a Form PCT/ISA/202.  The filter term is “receipt of Search Copy at ISA confirmed to the IB” and you pick “no” for the filter term.  And you will get a handy report of all of your PCT cases where Form PCT/ISA/202 never arrived.

(I have a vague memory that I may be the cause of this feature of ePCT.  Our firm was a beta-tester for ePCT and I think maybe I was the one who suggested that this feature be provided.)

Okay so let’s say we have received this mysterious-but-precious Form PCT/ISA/202.  What’s next?  What do we care about on this Form?

The first thing that we will care about is that, with the information on this Form, we can work out when the ISR/WO is scheduled to be established.  The formula is:

Now of course there are some clients who will not care at all about this business of “when is the ISR/WO supposed to show up?”  For example there may be a client who says “my sole reason for even filing a PCT at all is simply to get 30 months.”  The client who says this is not going to be obsessed with whether an ISR/WO arrives a month earlier than expected or a month later than expected.

But on the other hand there are some clients who, oddly enough, seem to feel that it would be a good idea to get a patent, and maybe who even seem to feel that getting a patent sooner rather than later would be better.  For such a client, a favorable ISR/WO will be the entrance ticket for the on-ramp to the Patent Prosecution Highway.

Indeed one client of our firm has given us standing instructions.  If we receive a favorable ISR/WO on a particular date, we are asked to enter the US national phase, and file a request at the USPTO for PPH status, before the end of that same day.

Now turning to another significance of the Form PCT/ISA/202. Let’s recall one of the consequences of receiving an ISR/WO.  One of the consequences is that an IDS is going to have to be filed at the USPTO, disclosing the references cited in the ISR/WO.  To file this IDS, the practitioner is going to need to be in possession of PDF copies of the cited references (other than the US patents and US published patent applications).

Let’s suppose that the client picked ISA/KR as the Searching Authority.  Then when the ISR/WO arrives, ISA/KR will make the references available in a particular way, namely by posting them to a secure web site.  The practitioner, having received the ISR/WO, will then go to the KIPO web site, plug in the PCT number and a secret code number, and click to download the references.

In the old days this meant that we at OPLF needed to try very hard to put Form PCT/ISA/202 in a safe place so that we could find it again when we needed it.  We would have to put it somewhere, so that three months later when the ISR/WO were to arrive, we would have the secret code number handy for downloading the cited references.

Of course nowadays it is not so hard to keep on top of these things.  If you make use of ePCT as a sort of “Private PAIR” for your pending PCT applications, then you can find Form PCT/ISA/202 any time you need it, by simply logging in at ePCT and clicking on the “documents” tab for your application.

« Serial number? Application number?
For the next week, an extra hour available for WIPO filings »