The Hague system, as most readers know, is the one-stop shopping system for filing applications to protect industrial designs around the world.  It is somewhat of a counterpart in the industrial design world to the PCT (for utility patents) and Madrid Protocol (for trademarks).  What is the progress of the US toward the Hague system?  When will people in the US actually be able to file Hague applications?  When will people around the world be able to designate the US when they file Hague applications?

The short answer is “probably in about Spring of 2015”, as I will now discuss.  Here is the long answer.

We all learned in high school civics class that under the US Constitution, it takes two things to join a treaty — the signature of the President and the ratification of the Senate.  For the Hague system this started with the signature of President Bill Clinton in 1999.  But it took many years for the Senate to ratify it.  Which the Senate did in 2007.

What needed to happen next was that Congress needed to pass a bill that would amend 35 US Code (our patent law) as needed to make Hague possible in the US, and the President needed to sign the Act.  A bill went to Congress in 2007 but did not get anywhere.  Hague remained on Congress’s to-do list for many years.  Congress finally passed the bill in December of 2012.  President Obama signed the Act on December 18, 2012.  This was the Patent Law Treaties Implementation Act.  You can see it here.

Rulemaking in the US is quite a process.  If things go simply and smoothly, the process is something like this:

I have listed twelve steps here, but of course this is an oversimplification.  People who do this stuff for a living tell me it is more like several hundred steps.  That’s if everything goes smoothly.  Sometimes it is necessary to back up and do a few dozen steps all over again.

The rulemaking for the PLT portion of the PLTIA went very smoothly, with all steps squeezed into a period of less than eleven months.  The USPTO, in a welcome burst of efficiency, managed to get its proposed rules for PLT published on April 11, 2013 and got its final rules published on October 21, 2013, leaving several weeks to spare before the statutory earliest possible effective date of December 18, 2013.   As a result, everything about the Patent Law Treaty took effect in the US on December 18, 2013.

But the rulemaking for the Hague portion of the PLTIA took much longer.   USPTO did not manage to publish its proposed rules until November 29, 2013 (you can see them here).  The comment period ended February 4, 2014, and you can see the public comments here.  So we are waiting for the final rules.

I have spoken with several different people at the USPTO who tell me unofficially that the rulemaking is now around steps 9 and 10.  I have also been given to believe that the best guess is that the final rules will get published (step 11) “before the end of the year”.

Once the final rules get published, are we done?  No.  What needs to happen then is that the United States needs to “deposit the Instrument of Accession” with the International Bureau of the World Intellectual Property Organization.  I suppose sometimes the depositing of an IOA might be done by sending a Federal Express envelope from one place to another, but in this case I think it will involve a US ambassador in Geneva popping over to WIPO 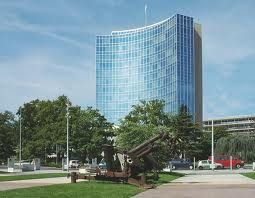 (pictured at right) and formally handing it to the Director General (Francis Gurry).  I imagine WIPO then runs off a few photocopies and places the IOA into a climate-controlled safe.

I have it on good authority that the US will not set forth a “later date” in the IOA.  Instead, the IOA will be silent on this point, meaning that the US will become formally part of Hague three months after the date of the handover from the US ambassador to Francis Gurry.

That date will probably be in early Spring of 2015.

I invite you to subscribe to this blog, if you have not already done so, and I will keep you posted on these further Hague developments.

2 Replies to “US progress toward the Hague Agreement”