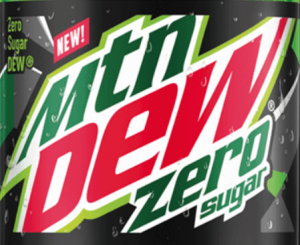 If like me you quaff the occasional Diet Mountain Dew, then you may have shared my puzzlement at the presence of a new product in stores — Mountain Dew Zero Sugar.  Are they the same thing?

It was only yesterday that for the first time I noticed the MDZS product in stores.  I purchased some of it, and I poured a flight of low-calorie Mountain Dew beverages and did a blindfold taste test.  (This particular flight only had two beverages.)  The answer is, no they do not taste the same.  To my tongue the MDZS tastes a bit better than the DMD.

I then clicked around a bit on the Internet.  It seems that MDZS was released in January of this year, although I somehow snoozed through it and did not notice the existence of MDZS until yesterday.  Here’s what the manufacturer says about the two products:

Here is a comparison of information from the package labeling for a 500-milliliter bottle of MDZS and a same-sized bottle of DMD:

My snoozing through the release of Mountain Dew Zero Sugar was so thorough that I completely missed that the launch of this product was announced during the Super Bowl!  The ad stars Bryan Cranston, who through the miracle of cgi appears on the screen not once but twice, and he is portrayed as the little girls in the movie The Shining.  I am not making this up!  I think it is very creepy but of course that is just one person’s opinion.

Oh and the alert reader will of course be asking “what is the etymology of ‘quaff’?” The answer according to some sources is that the word is onomatopoeic, meaning “the word sounds like whatever we are talking about”. In other words, if you sit and listen while someone is quaffing a beverage, maybe you will hear something that sounds like the word “quaff”.

Yes, yes, I know, plenty of people say you should not drink diet sodas at all.  People who drink a diet soda hoping it will help you lose weight, they are all wrong, it actually tricks your brain into wanting more sugar, people say.  The caffeine is not good for you, better to have the natural caffeine from coffee or tea, people say, and anyway caffeine is a diuretic and so if your goal is to hydrate, the caffeine makes things worse instead of better.  It’s better simply to drink ordinary water, people say.  The artificial sweeteners, they have too many syllables and anyway all chemicals are bad for you, people say.  To which my answer is, have you ever stopped to consider that most ordinary water contains a measurable concentration of dihydrogen monoxide?  I found a very helpful web site that discusses dihydrogen monoxide.

Have you tried MDZS?  If so, what do you think of it?  Please post a comment below.

(You can see a followup article here.)