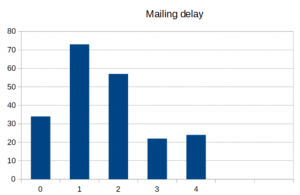 So of course if you want to be smart about all of this, you will start using Patentcenter now so that if there is anything wrong about it, you can report it to the USPTO and USPTO can fix it now before it’s too late to fix it (after things about it get carved into stone).  (And of course you will join the Patentcenter listserv so that you can contribute to the trouble ticket system and be part of the beta testing community.)

Anyway, back to “View Outgoing Correspondence”.

As Three Dog Night sang in 1969, one is a lonely number.  It seemed a bit odd that there would only be one piece of outgoing correspondence given the number of active files on my firm’s docket at the present time.  It seemed particularly odd given that we are approaching the end of a calendar quarter and Examiners at the USPTO are of course anxiously trying to collect “counts”.

So what this should mean is that if I were to go to the trouble right now this morning of logging in at Private PAIR to “View Outgoing Correspondence” it should be the exact same Three Dog Night situation.  One lonely piece of outgoing correspondence that requires my attention.

Well would you look at that!  In Private PAIR, my “View Outgoing Correspondence” screen lists thirty-one items.  Most importantly, it lists nine items of outgoing correspondence with a mailing date of today, June 23, 2020.

Or to put this as plainly as possible, the missing eight items are a trap for the unwary.  A malpractice lawsuit waiting to happen if somehow I end up failing to docket one or more of those eight other items of correspondence.  Why?  Because stupidly I trusted that those USPTO people actually accomplished what they said they were trying to accomplish when they were designing Patentcenter to replicate and improve upon the functions of PAIR.

It took a little while but eventually I figured out the design mistake that the Patentcenter designers made.  It is tied to the average slowness of the USPTO clerks who “image” documents and then “mail” the documents.

Here are the exact numbers and percentages:

The key here is that the highest observed number of days of delay is “four”. 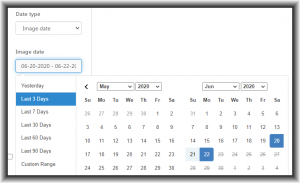 So what did I do wrong as a user?  Is it that I failed to check diligently every day?  No, that’s not it.  I did click in Patentcenter yesterday to look at my outgoing correspondence.  But as of yesterday, those eight pieces had not been mailed yet.  Yes, they had supposedly been “imaged” but that is an internal function within the USPTO, not visible to anyone outside of the USPTO.  I could not see them yet because they had not yet gotten “mailed”.

Yes, the design mistake was for the USPTO people to pick “three” as the number of days that Patentcenter would go back when it looked for imaging dates of documents to report to the user for outgoing correspondence.   “Three” is wrong.  The correct number absolutely must be four or greater, given that the actual observed behavior of the USPTO clerks is that eleven percent of the time, they sit on imaged documents for four days before mailing them.

What might be baffling here is that yes of course the responsible thing to do when designing this screen would be to do what I did.  Go and look and see what the actual behavior is of the USPTO clerks.  It is easy enough to analyze six months’ worth of data (as I did) and to find that quite often, the clerks sit on documents for four days.  It is easy enough to work out that the default number in this “outgoing correspondence” screen absolutely must be a number at least as big as “four”.

But that’s not the baffling part.  The baffling part is, given that the designers of PAIR had picked “seven”, how did the designers of Patentcenter get it into their heads that they should do anything other than replicate this function of PAIR?  How did they get it into their heads that in Patentcenter, they should change from the number “seven” to some other number?

The default setting for this screen in Patentcenter needs to get set to at least “four”.  This is Patentcenter trouble ticket CP31.