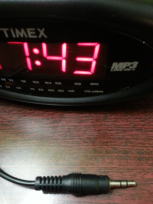 I checked into a hotel recently where the clock radio in the guest room had a conventional 3½-millimeter plug (see photo) which could be plugged into the guest’s smart phone or music player.  This would permit playing music through the speaker of the clock radio.  What I found amusing is what the manufacturer chose to write on the clock to let the user know about this feature — “MP3”.  This is silly.

MP3 is a particular compression algorithm for storing music.  But there are many other commonly used compression algorithms for music, among them WMA and OGG.  By the time the music gets from the memory of the hotel guest’s phone or music player to this 3½-millimeter plug, the music has been decoded and converted to analog.  The analog signal passed through the 3½-millimeter plug and its cable to the clock radio, where it passes through an (analog) audio amplifier to the speaker of the clock radio.

Timex, the maker of the clock radio, seems to think that “MP3” means something like “a consumer electronic device that provides an analog audio signal by means of a 3½-millimeter jack.”  Or maybe Timex thinks that the average American thinks that this is what “MP3” means.