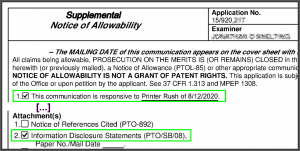 Beginning a couple of years ago, some very nice people in the Issue Branch at the USPTO have promoted patent quality, and have promoted science and the useful arts, and have saved us as patent practitioners from a lot of stress and malpractice risk, by looking out for IDSs that have not been considered.  In the past, we as patent practitioners had to pester the Examiners to consider such IDSs.  Those very nice people in the Issue Branch at the USPTO do the pestering for us nowadays.  I am guessing I will never get to learn the names of those very nice people, and will never have the opportunity to thank them directly.  All that I can do, I guess, is thank them in this blog.  Maybe someone at the USPTO who knows who those nice people are can print out this blog article and show it to them.

For the reader to fully appreciate the helpfulness of these nice people in the Issue Branch, a bit of background is called for.

When I launched my own patent firm, a very long time ago, one of the first things that we did was to set up “IDS logs”.  In each trifold paper file (yes, this was in the days of trifold paper files) there was a brightly colored piece of paper dedicated to the logging of Information Disclosure Statements.  (As I recall we eventually decided that this document was so important that we would keep it topmost on top of the drawings in the “drawings” section of the trifold file.)  The idea of this log is that each time we were to file an IDS, we would make note of it in the log.  Each time that an Office Action arrived, we would look to see whether we had received or had not received from the Examiner a signed copy of the IDS, acknowledging that the Examiner had reviewed the references cited in the IDS.  This “looking to see” process got repeated when the Notice of Allowance arrived from the USPTO.

Nope.  We needed to see that the Examiner had not, for example, “lined through” some reference on this signed IDS that we had not yet seen.  We needed to see it with our own eyes.  Could the Examiner fax the signed IDS to us, we would ask?  No, that was not proper procedure, the Examiner would tell us.  So then there would be another series of calls to the SPE and to the Director of the Tech Center and so on until someone would make an executive decision to pop the signed IDS onto a fax machine to us so that we could see with our own eyes that the Examiner had actually signed the IDS and had not “lined through” any references.

A further moment of background needs to be established, namely to discuss “why is this important?”

The reason that this is important is that TYFNIL an unconsidered IDS in a patent file wrapper will be an invaluable gift to the accused infringer.  Able counsel, representing the accused infringer, will have no difficulty finding real or imagined reasons why the references cited in that IDS, had they only been considered by the Examiner, would supposedly have made all the difference in the world as to what was patentable and what was not.  It is easy to imagine fact patterns where the presence of an errant IDS like this could completely derail an otherwise lucrative patent license, or could greatly diminish the settlement value of an infringement claim.

Not to put too fine a point upon it, but a patent owner facing such a lost patent license or devalued settlement might well choose to assert a malpractice claim against the patent practitioner who paid the Issue Fee while failing to notice that there was an unconsidered IDS floating around in the patent file.

Which brings me to the main point of this blog article.  The main point of this blog article is that starting around two or three years ago, people in the Issue Branch at the USPTO apparently decided that part of their job included IDS logging.  Yes, when the time came for Final Data Capture, they would look through IFW to find all of the IDSs that had been filed, and would match them up against the signed IDSs appearing in IFW.  If everything matched, then that was one thing.  But if the review by the Issue Branch person revealed the existence of an IDS that had been timely filed and had not yet been considered by the Examiner, then the Issue Branch person would swing into action.

When the printer finds an apparent error in an application or other issue which prevents publication, the file is returned to the examiner, a “Printer Rush” form is included in the Image File Wrapper (IFW) and is indicated with a “RUSH” document code, noting the supposed error or issue. Additional issues which may prevent publication until they are resolved include but are not limited to: amendments under 37 CFR 1.312, a Request for Correction of Inventorship under 37 CFR 1.48 and Information Disclosure Statements which have not been initialed by the examiner.  These applications are placed on the examiner’s “expedited” tab in Docket Application Viewer (DAV) and should be taken up for immediate action.

All allowed cases returned to the examiner marked as a “Printer Rush” must be processed and returned within the period indicated.

Does this practice by the Issue Branch mean that we can simplify our checklist of things that we do when we receive a Notice of Allowance or get ready to pay an Issue Fee?  Can we skip the step of checking for ourselves to see if all of the IDSs have been considered?  In our firm, we continue to feel that the answer is “no”.  We still check these things.  We do not assume that the USPTO people are going to catch every errant IDS.  But in recent years I must acknowledge with some admiration that the USPTO people have not slipped up on even one of our files.  It has not happened even once in these past couple of years, when we did our IDS check at Notice-of-Allowance time and found that there was indeed an outstanding IDS, that the USPTO people failed to create the needed “printer rush”.

So thank you to these nice Issue Branch people, whose names I imagine I will never learn.  Thank you.

Turning to our dear reader … in your practice, did you formerly maintain IDS logs?  Do you still maintain IDS logs?  When you receive an Examiner-signed IDS, do you invariably scan it in trepidation, wondering if this is an IDS where some reference got “lined through”?  Were you aware of this nice IDS-logging activity by the Issue Branch people?  Please post a comment below.

« What if you were not happy with service from the Application Assistance Unit?
Two more Offices join the WIPO DAS system »