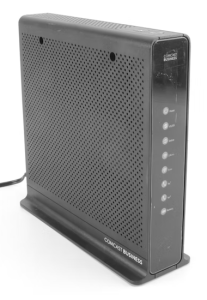 Everybody who is a Comcast internet customer eventually finds out that if you have one of these Comcast-provided routers that is the size of a cereal box, you are providing something called an “Xfinity hot spot” to everybody in the world.

The idea of the Xfinity hot spots, of course, is that this becomes a selling point — a reason why somebody might want to subscribe to Comcast internet service, so as to be able gain the benefit of the ten million or so of these cereal-box-sized routers that are in place around the US.

When you as a Comcast customer learn that you have one of these routers, and you learn that you are hosting an Xfinity hot spot, you wonder if there is any drawback to this.  Are you, for example, going to see a hit on your internet speeds if half a dozen members of the public are connected to your hot spot and making heavy use of the connection?  (I have done tests and yes, if you put enough public users on the hot spot, it does slow down the internet for the paying customer, especially if they are on a low-speed tier of service.)  But a completely separate question is, is the Xfinity hot spot taking up radio spectrum space that you might need in your home or office for other devices, such as Bluetooth hearing aids, DECT cordless phones, or mesh networking devices?  And of course the answer is yes.

Which leads to the natural question, how does one go about turning off one’s Xfinity hot spot?  I spent the past 24 hours trying to turn it off for my new service that got installed yesterday, and I have still not succeeded.

The first thing that most people would think is, it must be that you log into the router itself to turn off the Xfinity hot spot.  After all, if you want to rename your own wifi network names, or change the passwords on your own wifi networks, or change your LAN subnet, or set up port forwarding, or any of dozens of other router configuration tasks, the way you would do it is by logging into the router itself.   And quoted at right is a screen that shows what happened when I clicked around inside the router to turn off the two private wifi hot spots that are available in the router.  You can see that each of them has a status of “inactive”.  And at this point you might think that this means that the router has stopped doing wifi.  Nope!  You can click and click and first, you will never see anything at all in the router’s configuration web interface that even so much as reveals the existence of the Xfinity hot spot, and second, you will never see any place to click to toggle it on or off.

There is one telltale in the router user interface.  What you can see, quoted at right, is a sotto voce mention that the 5 GHz radio is still active.  The web page does not tell you what the 5 GHz radio is doing.   But if you click around in a nearby notebook computer or tablet or cell phone, you will learn that this means the Xfinity hot spot is still active.  The router is still tying up (at least) a 40-megahertz-wide portion of the 5 GHz spectrum that you might have used for DECT phones or mesh routers or some other essential function in your home or office.  Indeed I think this router runs a 3×3 MIMO and is tying up three 40MHz-wide channels.  It has the potential to pass up to 450 Mbps over the Xfinity hot spot.  For somebody who is subscribed to one of the lower-speed tiers of Comcast internet service, a loss of 450 Mbps to a third party could be noticeable.

Which brings us back around to, how exactly is the Comcast customer able to toggle the Xfinity hot spot on and off?  Comcast’s decision was to hide away this user toggle in the web-based billing portal.  You can click here to see what Comcast says about how a Comcast business customer can turn off their Xfinity hot spot.  You start by setting up a user ID and password and two-factor authentication and “registering” your newly installed Comcast internet service to a newly created account in the web-based billing portal.   Having done all of this, you then click and click and click until you reach the page quoted at right.  As you can see in the red box, there is a gear that you can click to toggle your Xfinity hot spot on or off.

Except not.  Not for me.  When I created the user ID and password, and registered the account, and clicked and clicked, I reached a page that looks like what you see quoted at right.  When I scroll to the place where there is supposed to be a gear for toggling the Xfinity hot spot on and off, what I see is a red X and the error message “Unable to load information — Please refresh the page or come back later.”

Some 24 hours have passed during which I have repeatedly refreshed the page and come back later.  During those 24 hours I have been on the telephone with Comcast tech support people named Larry, Susie and Alex (an hour and a half).   After that I was on the telephone with Comcast tier-2 tech-support person John and eventually his supervisor Brent (just over an hour).  Everybody tells me they are incapable of fixing this problem.   One of them got the bright idea of remotely crippling the router so that none of its radios work any more.  This means I lost any ability to re-enable even the private wifi hot spots.  The buttons for turning on the private wifi hot spots had gotten grayed out.  He did this without my permission.  (Supposedly later the crippling was remotely undone.)  Today I was on the phone with an “escalation team” member named Bill who also said he cannot fix it.

So anyway as of right now, I am still unable to toggle the Xfinity hot spot on and off.