Unfortunately all too often the USPTO doesn’t get this.

Today we received a Notice of Insufficiency from the USPTO in a newly filed entry into the US national phase from a PCT application.  The PCT application names an inventor from an Asian country.  The national-phase application is not yet public so I will use the name of the president of South Korea as an example.

The USPTO’s standard Declaration of Inventorship (form PTO/AIA/01) requires that the “LEGAL NAME OF INVENTOR” be typed on the form.  If as in this example the inventor had been the president of South Korea, the Declaration would have shown “ 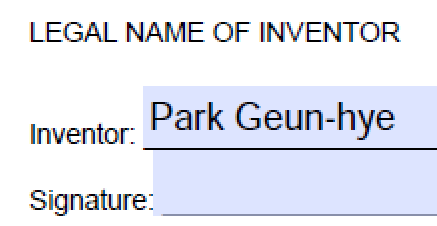 Park Geun-hye” as the legal name.

The USPTO’s standard Application Data Sheet (form PTO/AIA/14) specifies that the “Given Name” be typed in a first field on the form, toward the left margin.  It specifies that the “Family Name” be typed in a second field on the form, toward the right margin.  If as in this example the inventor had been the president of South Korea, the ADS would have shown “Geun-hye” as the Given Name and “Park” as the Family Name.

On this set of facts, today we received a Notice of Insufficiency from the USPTO identifying a supposed defect in the ADS:

In this Notice the USPTO states that we must prepare and file a corrective Application Data Sheet with strikethroughs and underscores showing the name correctly.  Oh, and we must pay a $140 “processing fee” with this corrective ADS.  Yes, the USPTO is saying (using the hypothetical name as an example) that we must hand in a corrective ADS listing “Park” as the Given Name and “Geun-hye” as the Family Name.  If we do this, and pay the $140 penalty, the USPTO will release the application from DO/EO processing to be examined by the Examining Corps.

I said “the Declaration is correct.  The inventor’s first name is ‘Park.'”

I tried a second time to point out that “Geun-hye” in the ADS was listed as the inventor’s “Given Name”, not the “first name”.

We went around and around a couple more times and I gave up.  I phoned up his supervisor, reaching her voice mail.  I left a detailed message, but have not heard back from the supervisor.

I’d guess that at least one-third of USPTO’s fee income comes from applicants in Hungary, China, Japan, Korea, Singpore, and Vietnam.  This alone ought to suggest the need to respect cultures in which the first name is the family name.

« Guest post: attorney liable for bad-faith C&D letter?
Best Practice for getting a priority document to the IB? »