Here’s a fun thing to notice.  These days the USPTO is picking up an extra $27 from the IB with each inbound Hague designation. END_OF_DOCUMENT_TOKEN_TO_BE_REPLACED

It’s that time of year again.  The time of year when it is important to keep track of the fact that Daylight Saving Time is different in Switzerland from the way it is in the United States.  This is important because you might be in the US, and you might be e-filing (or fax-filing) some document with the International Bureau of WIPO.  END_OF_DOCUMENT_TOKEN_TO_BE_REPLACED

See this link on the WIPO web site for information on upcoming PCT Seminars.  These are free of charge. 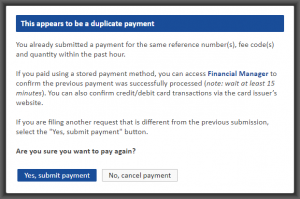 Every beta tester of Patentcenter has run into instances where you click to pay money, and Patentcenter crashes, or pops over to the screen that you use for logging in at Patentcenter (the implication being that somehow you got logged out from Patentcenter during the split second after you clicked the button to pay the money). You then click around in Patentcenter and in Private PAIR and in Financial Manager, hoping to arrive at some clear sense of whether or not the payment actually succeeded. Nope. Nowhere in any USPTO system is there anything that you could ever use as proof that you paid the money. And of course Patentcenter still fails to provide “last 40 ack receipts” even though the alpha testers of Patentcenter griped about the lack of “last 40 ack receipts” back in autumn of 2018.

Just now this happened to me yet again, maybe the tenth time in two weeks.  Just now I clicked to pay money, and instead of displaying an ack receipt for the money, Patentcenter popped over to the screen where I am invited to log in at Patentcenter. Of course that’s what I did. I logged back in at Patentcenter. At which point I looked in all of the usual places hoping to find some way to know what the chances are that the USPTO would later play dumb and say I never clicked to pay, the other risk being that eventually I might pay again and then have the USPTO say “aha you paid twice” and then I would have to file a refund request, and set a docket to see if the USPTO ever got around to refunding the duplicate payment, and so on. Nope. Nothing in Private PAIR, nothing in FM, nothing in Patentcenter itself could be found that would amount to the USPTO taking a position one way or the other as to whether I had or had not successfully paid the money.

Oh and of course this was one of those instances where the documents that I had e-filed were nowhere to be seen in IFW.

With a a couple of clicks of the browser “back” button in Patentcenter, I eventually once again reached a page that invited me to select a payment mechanism, although the amount of money that the page was going to have me pay was “zero”.
With a couple more clicks of the browser “back” button in Patentcenter, I reached a screen that invited me to pay money, and then proceeding forward in the click path I once again had the opportunity to actually pay the fee that I had tried to pay a quarter of an hour earlier. So I selected a payment mechanism and then clicked to pay. And here’s the thing that prompted this blog article. What popped up next on my screen was a warning (quoted at the top of this blog article). The warning said:

This appears to be a duplicate payment

You already submitted a payment for the same reference number(s), fee code(s) and quantity within the past hour.

If you paid using a stored payment method, you can access Financial Manager to confirm the previous payment was successfully processed (note: wait at least 15 minutes). You can also confirm credit/debit card transactions via the card issuer’s website.

If you are filing another request that is different from the previous submission, select the “Yes, submit payment” button.

Are you sure you want to pay again?

So at this point I figured maybe the USPTO really did receive my money.  And indeed about an hour later, after logging out of Patentcenter and logging back in I was able to look in the fee tab for this application and sure enough, the fee that I had just tried to pay was listed as having been paid.

But even after the passage of an hour, the documents that I e-filed are still missing from IFW.

The system is temporarily unable to process your request. Please try again later. If you have questions, please contact the Patent Electronic Business Center at 866-217-9197 or ebc@uspto.gov.

But if we cannot get any of these wishes about Patentcenter to be granted, we can at least be glad that some hidden-away bit of software inside of Patentcenter is looking at some kind of payment log to see whether the fee that we are just now getting ready to pay happens to match the application number and fee code and quantity of a payment that we already made within the past hour.  This little snippet of code should not actually be needed, because Patentcenter should not be crashing all the time and “forgetting” that you are a logged-in user and randomly being “temporarily unable to process your request”.  But just now this snippet of code saved me from paying a fee twice, which is nice.

I guess the metaphor for this would be if a company that makes tennis shoes had found that its shoes have the unfortunate habit of catching fire at random times as you walk around while wearing the shoes.  Common sense tells you the company really ought to figure out why the shoes keep catching fire and make it so that this does not happen nearly so often.  But if the company provides an extremely effective pocket-sized fire extinguisher with each pair of shoes at no extra charge, at least maybe you can use it to put out the fire before it spreads to your trousers.

Thank you, Patentcenter developers, for providing the fire extinguisher!

Now having spent who knows how much money designing and implementing the fire extinguisher, please don’t lose sight of the need to figure out how and why Patentcenter keeps crashing all the time and “forgetting” that I am a logged-in user and randomly being “temporarily unable to process my request”.   Please fix those things as well.

We have been reporting this problem since at least as long ago as August 1, 2020.  See bug report CP35.  which we copied over as Ideascale idea number 599.  See my August 1, 2020 blog article about this.  More than two months have passed with not a word back from anyone at the USPTO about this.

But yes, thank you for designing and implementing the fire extinguisher.

Dear readers, I am delighted to be able to report that the USPTO did the right thing this past week about ePCT. The executive summary of it is that the USPTO had published a Federal Register notice on May 6, 2016 that put a cloud over the use by US applicants of ePCT. The cloud related to USPTO’s interpretation of 37 CFR § 5.15 which has to do with foreign filing licenses. In a Federal Register notice on September 30, 2020, the USPTO promulgated a change to 37 CFR § 5.15 which removes the perceived problem relating to foreign filing licenses. The thing that I am delighted to be able to report is that the USPTO has expressly stated that the warning in the May 6, 2016 Federal Register notice no longer applies. Applicants that were apprehensive about using ePCT during the past four years can now set aside that apprehension. (There are still things about foreign filing licenses that applicants need to be careful about, as I will discuss.)

This good thing that the USPTO did on September 30, 2020 happened because twenty-one patent practitioners asked it to do so.

That’s the executive summary.  Here are the details.

END_OF_DOCUMENT_TOKEN_TO_BE_REPLACED

(Updated October 16, 2020 to reflect that the IB has now updated Annex D for Finland, noting that ISA/FI does not charge a protest fee.  Now only Spain’s searching authority remains outstanding in this effort.)

A patent office that was responsive recently to a practitioner’s frustration has now been even more responsive.  How is that for a bit of good news? END_OF_DOCUMENT_TOKEN_TO_BE_REPLACED

Yes, today is the day that Italy joins the DAS system as a Depositing Office.  You can read about it here.

Today is the day that the Austrian Patent Office commences participation in DAS.  (I reported this to you in a blog post on July 21, 2020.)  The APO is participating as an Accessing Office in every way that it is possible to participate:

The APO is participating as a Depositing Office in every way that it is possible to participate: