One of my favorite listservs is the E-Trademarks 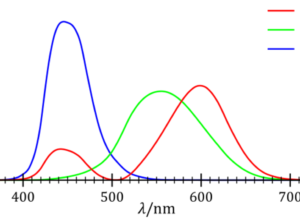 listserv.  This community of trademark practitioners raises fascinating practice questions.  Here is a question raised by one of the listserv members:

Does anyone have any recommendations on the best printers to use for trademark practice? We obviously need something that prints true colors. So a low-end printer probably won’t do. But we are also looking for high-capacity, non-shared printers that are economical on ink. Anyone have a printer they love?

The part about printing true colors got me thinking about how colors work.  When I took physics class in college the notion of “color” was pretty simple — you would pass a beam of white light through a prism and what would come out was a spectrum of colors.  The spectrum (literally a continuous spectrum) was composed of an infinite number of distinct wavelengths, each of which would be emitted from a prism at a particular distinct exit angle.  But with printers, there are actually only three colors of toner.  How can this be?

Let’s set a bit of background to this situation to emphasize how odd this three-color business is.  Again, when I was in physics class, if the professor were to ask me exactly what color something is, my way of answering the question would be the equivalent of passing the color through a prism and measuring the exact angle at which the light exited the prism.  The angle might be this many degrees or that many degrees, expressed with whatever number of decimal places of accuracy the professor required.  The underlying property being measured would be the wavelength of the photon or light wave (depending on how you think about light).  The photon or light wave has this wavelength or that wavelength, measured with whatever number of decimal places can be accomplished.

But the printer in my office does not replicate this result.  The data file being sent to the printer does not say “for this pixel, deposit a particle of toner that somehow matches this particular wavelength of light”.

The printers that we all have in our offices, regardless of whether they are ink-jet or laser printers, use a mere three pigments (yellow, cyan, magenta) along with black to approximate that infinite number of distinct wavelengths.  Those three pigments, if expressed as light, would exit from a prism at a very small number of distinct exit angles.

This trick of using just three color values to fake the eye into thinking it is seeing any one of an infinite number of distinct color values is a remarkable trick.  But it’s a trick nonetheless.  A fascinating trick.

The color display on your smart phone or notebook computer or home-theater flat-screen television … it likewise employs little tiny emitters which emit a mere three possible specific colors.  And again the trick is to fake the eye into thinking that at a particular pixel location the eye is seeing some other color that is not at all the same as any of those three specific colors.

This same fakery — this same fiction that you can actually ignore the particular wavelength of the light arriving from some point in space, and instead merely measure three other color values– happens in cameras.  The camera that you might use to snap a color photo of an object … the camera uses sensors sensitive to three colors of light.  For each pixel there are three sensors.  The design of the camera assumes that by measuring how bright the color of the object is at each of these three particular colors … that those three numbers will suffice later (when the time comes to print on a printer, or display on a screen) to fake the eye into perceiving the same color (among an infinite number of possible colors) as was emitted by the object back when the camera was snapping the photograph.

This super trick — that a camera that measures intensity of light at a mere three different specific colors when photographing some object, might somehow capture enough information that later a printer could print any of a mere three colors of toner onto a page and fake the eye into thinking that it is seeing (more or less) the exact same color as was emitted by that object — is a really remarkable trick.  How can it possibly work this way?

The answer of course is that the human eye does not go to the trouble of passing light through a prism and checking to see the exact angle at which the light exits from the prism.  The human eye instead uses only three sensors.  This leaves open the chance that with the correct choices of toner colors in a printer, one could do a fairly good job of faking out the three sensors in the human eye.

The three sensors are three distinct types of “cones”, cells in the retina whose job it is to perceive color.  The graph above shows the color sensitivity of each of the three types of cones across the spectrum of colors of light that might arrive from some point in space, landing on the cone.  (It is fascinating to see that the “red” cones are actually bimodal, responding mostly to red but also with a smaller peak in the blue part of the spectrum.  This bimodality of the red cones is ignored by most designers of cameras and printers and displays and the like, mostly because there is nothing that can be done about it.)

If a Martian were to land on earth and start looking around at cameras and displays and printers, the Martian would see, over and over again, this trickery of using just three colors to somehow replicate a world in which color values are continuously variable and there are an infinite number of actual colors.  The Martian would eventually work out that this trickery is tied to the happenstance that if you go poking around in the retinas of human eyes, you find that there are three kinds of cones detecting (more or less, see above) three color values.

Why “three”?  Why not “two” or “four” or some other number?  As it turns out, humans (most humans, the ones who do not suffer from color blindness) have three.  Why “three”?  The ancestors of humans who first came to have three kinds of cones evolved the number “three” a few tens of millions of years ago.  Before they had three, they had two.  Scientists who do this sort of thing for a living have, understandably, spent a lot of time trying to figure out why (as a matter of evolution) the early primates went to the trouble to develop a third color of cones.  There are theories about distinguishing between ripe fruit and fruit that is not yet ripe.  And theories about detecting skin flushing and thereby mood.  Yes, maybe twenty million years ago the guy sitting in the singles bar might pick out a woman to ask out on a date, using this third color of cone.  And be more likely to have offspring, and so on.  Perhaps such discussion is beyond the scope of this blog article.

Meanwhile if this same Martian were to go to the trouble to poke around inside eyeballs of present-day birds or reptiles and many kinds of present-day fish, the Martian would find four colors of cones.  What other kinds of animals are there?  Well, there are the mammals that happen not to be primates.  And the Martian would find that in the eyeballs of those mammals, there are generally two colors of cones.  Not three, not four.

Oh, and back to the listserv question that started all this.  What do I recommend for a printer?  How accurately will the printer reproduce colors?  The original question posited that maybe a low-end printer would not reproduce colors as well as a more expensive printer.  To which my response is, the precise colors of the toner in the three toner cartridges probably is the main determinant of the level of success at reproducing colors.  And these days as far as I know, all of the printer makers use pretty much the same three toner colors.  So I’d guess that no matter how much or how little money you spent on a laser printer these days, probably the level of success at reproducing the colors would be very nearly the same.

« Success and failure with Dolby 5.1 surround sound
Why it is super-important to get a Power of Attorney filed in absolutely every patent file »