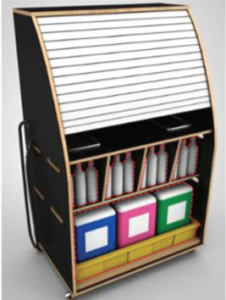 As US patent practitioners know very well, the chief database used by USPTO personnel to carry out most patent prosecution (including design patent prosecution) is called IFW (image file wrapper).  Some nameless person at the USPTO made a decision back when IFW was being designed a decade ago, to make this a database in which no color or grayscale drawing would be displayed clearly.  Instead any color or grayscale drawing will get blurred, often to the point of unrecognizability.

Which then raises the question, how may a member of the public obtain a PDF copy of an issued US design patent that shows the actual color or grayscale drawings instead of the blurred non-color drawings of IFW?

In this blog article I will tell you how you can obtain a PDF of an issued US design patent that faithfully reproduces the color or grayscale drawings.  To do a good job of explaining this, I must first provide a bit of background as to an image formatting concept called “halftoning” (Wikipedia article).

You might wonder “why three?”  Why is three the correct number of colors to use in a computer file that stores a human-readable image that is in color?  Why not two or four or some other number?  And I answer that question here.  The answer turns, depending on which school of paleoanthropology you follow, on either the skills for identifying ripe fruit around ten million years ago, or the skills for selecting a potential date in a singles bar around ten million years ago.  You can read a fascinating lecture by Richard Feynman in which he explains how the three colors work.

The other possibility in 2019 is that the computer file is trying to store “grayscale” rather than full color.  (And no, we are not here discussing the imagined skin disease from Game of Thrones.)  In the case of grayscale, each pixel will have its content defined by 8 bits.  This means that each pixel of the drawing has a value between 0 and 255. 0 is white and 255 is black. The other 254 values are various shades of gray. The number 128 is about half way between white and black. A computer geek would say that there are “eight bits per pixel” or “a color depth of 256”.

We then turn to the unfortunate decision made a decade ago by some nameless person at the USPTO, namely that the IFW database would store its images using “a color depth of two”.  The idea was that each pixel is assumed to be either pure black or pure white in color.  The IFW system only stores images in which each pixel has only two values — 0 or 1. 0 is white and 1 is black. Each pixel is either pure white or pure black. A computer geek would say that there is “one bit per pixel”.

A century ago or even as recently as half a century ago, the halftoning was often a necessary evil.  Most printing technologies that were in use 50 or 100 years ago were technologies that either transported ink from point A to point B or did not transport ink from point A to point B.  For each spot on the piece of paper where printing is taking place, either the spot got ink on it or the spot did not get ink on it.  Through the use of halftoning, a fairly workable image with gradations of gray or color could be successfully printed on a page even though at any given spot the situation was a “yes or no” thing with either ink being deposited or ink not being deposited.

But now in 2019, data storage costs are only a fraction of a percent of what they were ten or twenty years ago.  In 2019, a system designer will not choose to store one bit per pixel for a human-readable image as a way of saving money, because it does not save much money these days.

Back to halftoning.  Here are images from an actual issued design patent that our firm obtained for our client Lenovo, that issued this past Tuesday.  This first image shows a portion of a figure, the way we e-filed it. 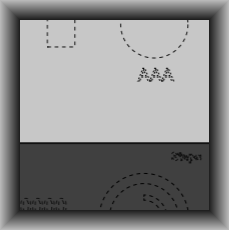 This image shows that same portion of the figure, the way it looked after the USPTO carried out its halftoning for storage of the image in IFW. 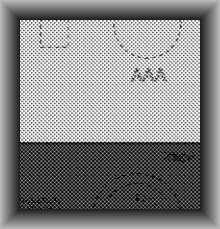 You can easily see that the halftoning degrades the image quality.  And this leads to a very poor quality image in the PDF of the issued design patent as it appears in the PatFT database on the USPTO web site, as you can see here.  Which brings us to the main point of today’s article, namely that the USPTO will sometimes preserve the original drawings as filed in a special database called SCORE (also called “supplemental content”).  If you are very lucky, when the USPTO issued your design patent, the USPTO may have made use of the SCORE drawings rather than the IFW drawings.  If so, then the USPTO will have stored that PDF in the Supplemental Content system.  To obtain the good quality PDF, go to PAIR and click on “Supplemental Content”.

You will then have a good quality PDF of the granted US design patent.

So the main point is that for a US design patent, if the drawings are simple black and white line drawings, then you may be happy with the PDF that you can get from the PatFT database.  But if the drawings have any gray scale or color, you will almost certainly prefer to get your PDF from SCORE.

Here are some examples:

Here is a color design patent that issued this past Tuesday on a Hague filing:

(It is this patent that provided the image at the top of this blog article.)  Note that the former is about one megabyte in size, while the latter is about 5.6 megabytes in size.  This particular case came to the USPTO from the Hague system, but similar degradations can happen with ordinary domestic US design patent filings.

« Better to use an RCE or a continuation?
When EUIPO will join DAS for designs »