Today I will talk about Tiles.  Tiles are a particular b 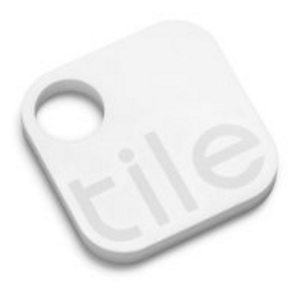 rand for a general product category namely device trackers.  Other brands include TrackR, iTrack, Nut, SwiftyFinder and Mynt.  I will tell you about this product generally, and then I will recount a couple of success stories.

What exactly do these products do?

The common theme with these tracking products is that they use Bluetooth to communicate with your smart phone.  You install an app on your smart phone and the app keeps track of where the tracking devices are.  The idea is that you put one on your key ring, and then if you can’t find your keys, you go look at the app and maybe it will help you find your keys.

How exactly does the app help you find your keys?  Three ways, as it turns out.

The first way that the app helps you find your keys is that you click on the app and it sends a Bluetooth message to the device, and it plays a melody.  You listen and maybe you hear the melody playing, somewhere around your home or office or hotel room or wherever.  Of course this only works if the device is quite nearby (maybe 30 feet) because the Bluetooth signal only travels about 30 feet.

The second way that the app helps you find your keys is that it can tell you where your smart phone was the last time that it communicated with the device.  So for example maybe you are in the office and the keys are at home.  So the phone might be able to tell you that the last time it picked up the device’s signal was when the phone was at your home.

The third way that the app helps you find your keys is by crowd sourcing.  You can tell the app that the keys are lost.  The app will then pass a message along to the manufacturer of the device.  The manufacturer then passes the message along to everyone in the world who has the app installed on their smart phone.  If you are very lucky, someone’s cell phone somewhere in the world will pick up the signal of the device.  You then receive a message telling you where your device was detected.

A first success story came up a few months ago.  By accident I left a fanny pack in a shopping cart at a grocery store.  To understand this story, you have to keep in mind that I did not know that that was where I left it.  All I knew was that when I got home late in the evening, I could not lay my hands on the fanny pack.  Recounting my recent errands, I was only able to make a guess that the missing fanny pack might be at any of half a dozen retail locations including the grocery store.  Or a bad person might have grabbed the fanny pack from wherever I had left it, and the fanny pack might be gone forever.

Of course all of the retail locations were closed for the day.  The situation was that I really wished that I knew where exactly the fanny pack was, and as of that moment I really only had guesses as to where it might or might not be.

Then I realized I had attached a Tile to the fanny pack.  So I hopped in the car and dashed over to the grocery store.  The store was closed, and it was dark in the store.  I then took a stroll along the front of the grocery store, holding my cell phone in hand and keeping an eye on the app.  Sure enough, the app beeped and told me that it had picked up the signal from the device!

So instead of spending the night wondering whether I would ever see the fanny pack again, I was able to sleep soundly without having to worry.

I had made note of the time of day that the store would open the next morning, and returned at that time to the store.  The nice people in the store found the fanny pack.  It was locked in a safe at the customer service counter.  A nice ending to this first success story!

As you might imagine, I have attached Tiles to all of my suitcases.  Which leads to the second success story.

I was in Virginia teaching a class.  At the end of the day, I found myself at Dulles airport, getting ready to get on the last flight of the day back to Denver.

Everybody boarded the airplane, and we sat for a while.  The pilot came over the public address speakers and said there was a problem with the door that covers one of the fuel filling locations.  We sat for another while, and eventually it was announced that we were changing planes.  We all disembarked, walked to a different gate, and boarded a different airplane.

The natural next question for anybody who had checked a bag was, did my checked bag get transferred successfully to the new airplane.  I pulled out my Tile app and looked for my checked bag.  Sure enough, the app said it had picked up the signal from the bag just two minutes earlier.  This mean that my bag was almost surely on the airplane with me.  A nice ending to this second success story!

Let’s suppose that you decide to try one of these tracking devices.  How should you make a choice among the many competing makers of tracking devices like this?  Clearly there is a “network effect”, that is, the product is worth more to you if more other people are also using the product.  So the most important selection criterion should be “how many other people use this product?”  The Tile company seems to advertise a lot more than any other maker.  And the Tile product seems to have picked up more media buzz than any competing product.  As such, I’d guess the smart money is to select Tile.