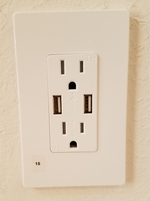 Here’s a nice home-improvement project — installing some USB receptacles around the house.  You’ve used outlets like this in hotels and airports.  Why not enjoy the convenience of such outlets in your own home?

Such outlets are not too expensive — around $25 each at your local hardware store.  On Amazon you can get a five-pack for about $92 ($18.39 per outlet).  The main thing to look out for is to make sure the USB ports are generous in the amount of charging current they make available.  You’ll want at least two amperes available per port.

When you are replacing an existing receptacle with one of these USB receptacles, a chief challenge is that the outlet is deep.  (See photograph at right.)  It extends into the outlet box at least an inch and a half.  So this retrofit is no good for a shallow box.  Even for a box of normal depth, the box may be filled with lots of wires and wire nuts and it may be a struggle to squeeze everything back into the box.

Where the wiring is 20-amp wiring (meaning 12 gauge wire) then it is particularly difficult to force the wires to fold up and fit into the back fo the box.  With one outlet that I was installing, I had to cut all of the wires shorter so that there was not so much wire that had to be folded up and forced into the back of the box.

One thing to be careful about is that if the existing outlet that you are thinking of replacing with a USB outlet is a GFCI (ground fault circuit interrupter) outlet, then you should not replace it.  The existing GFCI outlet is almost certainly located there because the electrical code requires it.  (And probably it is a safety issue because the outlet is outdoors or is near a sink or other plumbing fixture.)  Removing the GFCI outlet would give rise to a code violation.  (You could of course retrofit a GFCI circuit breaker for that circuit, and that would permit you to take the GFCI outlet out of service and install a USB outlet in its place.)

Such USB outlets might be handy at a kitchen or bathroom counter.  I use such an outlet to power an Echo Dot.

You’ll note in the photograph above that there is a circuit number on the outlet.  As I blogged recently, this can be another home-improvement project — labeling the outlets around the house with their circuit numbers.

One thought on “A home-improvement project — USB outlets”