If you have a web site, you should probably forward this blog article to your webmaster.  Hopefully he or she will be able to tell you that either (a) you are already using Let’s Encrypt or (b) you are only paying $8.88 per year for your SSL certificate!

It used to be that to accomplish “https://” status for a web site, you had to pay a bunch of money (often $60 or more per year) to a “certificate authority” to get the all-important “SSL certificate”.  And it used to be that to carry out the renewal the webmaster would have to carry out a dozen or so very fiddly steps in a completely manual fashion.

But a few months ago I wrote about a nonprofit organization called “Let’s Encrypt“ that gives them away for free.  At our firm we have migrated nearly all of our web sites to Let’s Encrypt and it has worked perfectly for us.  Not only is the Let’s Encrypt service free of charge, but it is also automates the renewal process.  No human being has to lift a finger to carry out the renewals.

But what about the webmaster who can’t or won’t make use of the free-of-charge and super-convenient Let’s Encrypt system?  The point of today’s blog article is to point out to that webmaster that there is no reason to pay $149 per year (as the web site mentioned above has been doing) for an SSL certificate.  If you are going to be stubborn and keep doing the fiddly dozen manual steps every twelve months, you might as well use the least expensive certificate authority. 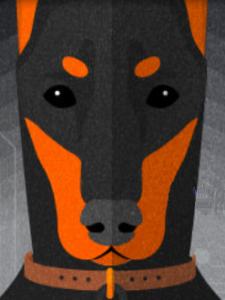 So far as I know, the least expensive provider of old-fashioned manually installed SSL certificates is the aptly named Namecheap which provides SSL certificates under the brand name RapidSSL.  RapidSSL has what I would conservatively call the most creepy logo that I have ever seen in my life (at right).  I guess it is a very serious dog wearing an orange and black wet suit.  But don’t let the logo scare you away.  The SSL certificates from this company cost a mere $8.88 per year.  That is a lot cheaper than the $149 per year that the well-known patent office mentioned above is paying.

Giving credit where credit is due, the only reason that I know about this super-inexpensive provider of legacy (manually installed) SSL certificates is that I was told about it by my webmaster-savvy client Webmagic.

« Design Day 2018
How fast is your internet connection? »