The other day I was in the hallway outside of our firm’s office, standing at the top of a stepladder, stringing some fiber optic cable through the drop ceiling.  A passer-by (a nice fellow from Redpoint Global, a software house next door to our office) saw the fiber optic cable that was being installed, and asked (he sounded envious) if we were getting gigabit ethernet.  I had to disappoint him — we were merely running fiber from one part of our office to another, not to the Internet.

But it got me thinking.  What does it cost these days to get a gigabit connection to the Internet?  I was astonished to learn that it costs less these days than it used to cost.  For $110 per month, I now have gigabit internet in my home.  I’ll describe the process and the results.

As I say, the inquiry from our office neighbor had gotten me curious.  I went on the Internet and surfed around.  The local mainstream providers are Centurylink and Comcast.  Centurylink’s main way of providing Internet is via DSL, but DSL is no good for gigabit speeds.  As it turns out, Centurylink can only provide gigabit in the (very limited) number of locations where it has already run fiber to the curb.  Centurylink’s fiber footprint did not include any of the locations were we might possibly want to try gigabit service. 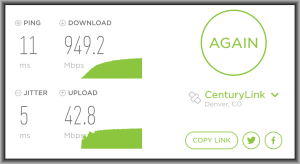 The service really works, as you can see in a Centurylink speed test, shown at right.

What becomes clear pretty quickly, when one speeds up the pipe to the Internet to gigabit speed, is that one has no choice but to speed up everything around the house.  Suddenly the wifi, which seemed nice and fast before at 30 megs, seems pokey slow.  To do justice to the situation, the wifi needed to be upgraded to a dual-band MIMO wifi that can provide much faster speeds.  The main router and ethernet switch needed to be upgraded to the fastest possible equipment.

As a more subtle thing, there were some ethernet circuits in the house that only used two pairs (conductors 1, 2, 3 and 6) and thus topped out at 100 Mbps, that needed to be upgraded to provide all four pairs.

The previous Comcast service in the house (which was commercial service) had some static IP addresses, but the residential gigabit service does not make static IPs available.  Comcast does, however, offer “additional IPs” that are DHCP IP addresses.  I ordered several of those IP addresses.  I am using Dyn DNS so that they work pretty much like static IPs.

As it turns out the $110 per month price for gigabit Internet is a teaser price.  Comcast jacks up the price after twelve months to the “everyday” price of $160 per month.  But even at $160 per month, this service might make sense for some users.

« How fast is your internet connection?
Get your numbers in for the 2017 US utility patent tote board »