(Here is a follow-on article.)

I finally decided to try out a digital wallet system.  By this we mean a system that uses an NFC (near field communications) radio link to pay at a store.  You can recognize which stores are equipped for NFC payments by looking for this logo (right).

Of course the digital wallet system that is all over the media lately is Apple Pay, which works only with certain very recently released models of iPhones.

It turns out that Apple Pay is the johnny-come-lately to the NFC party.  Other companies have been offering NFC payment systems (digital wallets) for over a year now. These systems that have been around for over a year do not require you to have an iPhone.

The NFC (digital wallet) system that I stumbled upon is Softcard, a consortium 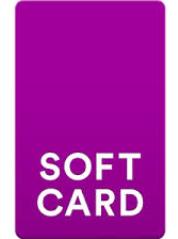 sponsored by Wells Fargo, Chase, American Express, AT&T, Verizon, and T-Mobile.  If you are an Android kind of person (which I am), the Softcard system turns out to be the way to do NFC.

What triggered all of this was sort of random.  I happened to be logged in to my customer account on the AT&T Wireless web site and saw the words “You have 6 messages from the past 90 days.”  Clicking further displayed the message “Device [phone number] needs a new SIM card to access all of its features. To get a new SIM card, please visit the nearest AT&T retail store.”

I printed out the message, hopped into the car, went to the nearest AT&T store, and showed it to a person there.  He said he wasn’t sure but he had a good guess what this was about.  He said the new SIM card would be an “enhanced” SIM card containing a cryptographic engine for carrying out certain cryptographic tasks.  The “features” for which this enhanced SIM card is needed, he explained, are just one thing — Softcard.  He said the enhanced SIM card (which the stores give away for free) is expensive and if I didn’t think I really needed it he would prefer not to give it to me.

Well I had gone to all this trouble to travel to the store and waited in line to talk with somebody, and for all I knew there might be other “features” for which this enhanced SIM card was needed that he did not know about.  So I obtained the new SIM card.

Then I downloaded the Softcard app from the Google Play Store, created a Softcard account, and got to work.

Setting up one of these digital wallets, whether it is Apple Pay or Softcard or Google Wallet, is quite a lot of fuss.  You start by creating an account for the wallet itself, but then you have to go through a bunch of steps to “add” credit cards to the wallet.  So for example I clicked in the app to add my Chase card, at which point it sent me over to the Chase web site where I had to try to recall the Chase user ID and password that I had set up years ago and then never used again.  Same thing for American Express and same thing for Wells Fargo.  Then had to send a fax with a scan of my passport and Wells Fargo debit card to somebody at American Express to prove who I was and what card I owned.  The total time invested to get the SIM card and get the app running and get the cards working within the app was many, many hours.

Then I set to work trying to figure out where to go to buy something.  The app has a “store finder” that will display participating stores on a map.  None of the stores were interesting to me.  Some time surfing the Internet revealed that maybe Whole Foods would accept my Softcard money, so I hopped into the car and went there.  Sure enough, the NFC logo (above) was on the credit card terminal.  I tapped my phone to the terminal, and made my purchase.  It worked!

But Whole Foods did not turn up in the store finder in the app.  I would never have known to go to Whole Foods except by doing a bunch of web surfing.

So should you go to the trouble of setting up a digital wallet?  It turns out the answer is “yes” you should.  The reason is simple.  Every time you pay by swiping a card with a magnetic stripe, you risk having your card number fall into the wrong hands.  We have all read about security breaches at Target and Home Depot and there have probably been many other breaches that merchants have chosen not to disclose to customers.  In contrast, when you pay by an NFC digital wallet, the system uses “tokenization”, a fancy way of saying that the card number itself does not get communicated, and instead a one-time-only “token” gets communicated.  The eavesdropper who overhears the token gets something that can’t be used again for a later fraudulent transaction.

Every time you use your NFC digital wallet instead of swiping a card, you greatly reduce the risk of someone skimming your card number and running up fraudulent charges that you will have to struggle with later.

Plus of course as mentioned here, surely we all wish to be TMU (trendy, modern, and up-to-date).  Surely using a digital wallet counts as being TMU!

Have you set up a digital wallet?  How much of a pain in the neck was the setup process for you?

One Reply to “Adopting a digital wallet”