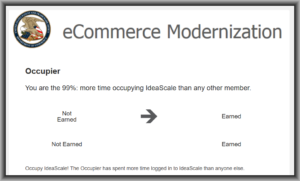 (Update:  More than a year has passed and few, if any, of the Patentcenter bug reports that I posted to Ideascale have been acted upon by USPTO.  So I have stopped posting to Ideascale.)

USPTO uses a system called Ideascale as a way to collect suggestions and comments from users of PAIR and EFS-Web and the alpha-test of Patentcenter (which will eventually replace PAIR and EFS-Web).

There is a small but fairly dedicated community of USPTO customers who are users of these systems, who regularly post things to Ideascale.  I am one of them.  And I am astonished to learn that I have been awarded the status of “Occupier” in the Ideascale system at the USPTO.

It turns out that the way a person wins this honor of being the “Occupier” is by being logged in at Ideascale more of the time than any other user.  Sort of a dubious honor, perhaps, suggesting that someone is having trouble keeping busy or does not have enough to do!  But anyway I have this status.

I also clicked around and learned that the Ideascale system has awarded several other “badges” to me.  My badges include:

Anyway if you have not already done so, you might want to join USPTO’s Ideascale system so that you can post comments and suggestions for the improvement of EFS-Web and PAIR and Patentcenter.

3 thoughts on “Wow I am an Ideascale Occupier!”