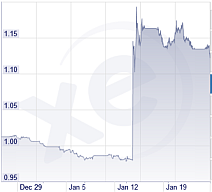 % relative to the US dollar, as shown in this graph (source:  XE.com).  It’s likely to stay this way for some time.  How will this affect filers of PCT patent applications?

WIPO pays its employees in Swiss Francs, and incurs most of its other operating costs in Swiss Francs.  When a filer files a PCT application in a Receiving Office outside of the RO/IB, the international filing fee paid is (generally speaking) based upon the exchange rate as it stood the previous October.  US filers pay $1384 to RO/US, for example, and RO/US forwards those dollars to WIPO.

With this exchange rate shift that happened on January 15, the effective number of Swiss Francs that WIPO will receive from the RO/US will drop to about CHF 1225 as compared with the CHF 1330 that is the fee set by WIPO, a drop of about 8%.

When exchange rates shift this drastically, you might think there is some mechanism by which the PCT fees would get adjusted accordingly, and you would be correct.  See Directives of the PCT Assembly Relating to the Establishment of Equivalent Amounts of Certain Fees.  According to these directives, if on four consecutive Fridays an exchange rate persistently deviates by more than 5% from the rate that was set the previous October, then WIPO can revise the fee based upon the exchange rate the following Monday.  The fourth Friday after the January 15 shift will be February 6, 2015, and the following Monday will be February 9.  My guess is that shortly after February 9, 2015, WIPO will indeed consult with the various Offices (for example USPTO and EPO) and that new fees will take effect two months later, or sooner if an Office agrees to an earlier effective date.

If today’s exchange rates were to persist until February 9, here are a few examples of the likely new amounts for the PCT international filing fee that would be established:

The new fee might take effect soon after February 9 (if the Office affected agrees to it) or would otherwise take effect in early April of 2015.

The high-volume PCT filer that has the ability to pick when to file a PCT application might wish to file sooner so as to save some money.