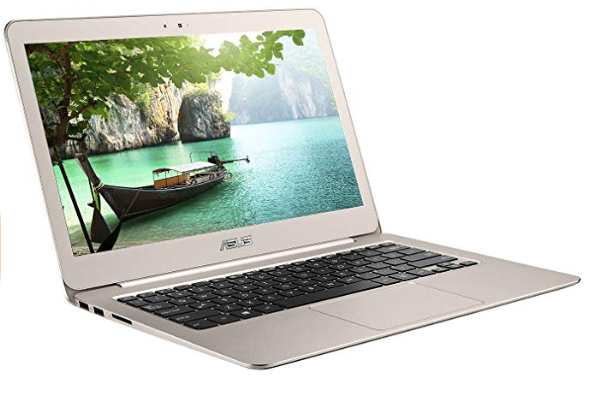 When a notebook computer stops working, the usual next steps are:

Yesterday I had to retire an old notebook computer and move to a new one.  But for me, the second step was only about ten minutes.  Not the usual two lost weekends.  How did this delightful result happen?

Any long-time loyal reader of this blog, seeing the question that I just posed, will be reaching to slap the buzzer on this one.  Of course you know the answer!  Of course you recall vividly my blog article of March 8, 2015 about always keeping an identical spare computer around.

Yes, this particular ASUS Zenbook situation got its start in 2015, when I purchased two identical ASUS Zenbooks like the one in the photograph.  I set up one of the computers to be my day-to-day computer.  The other one was the idle spare.  A few days later the screen started acting up.  I swapped the (SSD) drives in the two machines, and sent the machine with the bad screen in for warranty repair.  My down time was about ten minutes that time.  Later the repaired machine showed up after its warranty repair.  (What really happened was the manufacturer sent me a brand new replacement machine.)

(Oh and as an aside, I am completely sold, completely convinced on the idea that if you are buying a notebook computer you should pick one with an SSD drive rather than a traditional spinning-platter disk drive.  You will not need to worry so much about dropping the computer and damaging the delicate platter or the delicate read-write heads of the drive, because with SSD there is no delicate anything.  And the power consumption of the SSD drive is much lower than that of the disk drive, so that the battery life is much longer.)

But returning to the story.  Those events happened in spring of 2015.  Now in January 2020 I had reached a point where my reliable workhorse Zenbook was way past its expected service life.  I always figure that with a notebook computer, if you get three years of service from it, you should call yourself very fortunate and be prepared for the possibility that you might need to move on to your next computer.  Anyway by now in January 2020 the reliable workhorse Zenbook was really way past its expected service life.  It had by then been in service for well over four years.  But it was just not doing very well:

So yesterday I decided that it was time.  I powered down the in-service computer.  I charged up the spare computer.  I pulled out my Torx T5 screwdriver and popped off the bottom cover of the in-service computer and the spare.  I swapped the SSD drives.  (Because I did not have my anti-static wristband at hand, I did the best I could by repeatedly touching the metal case of both computers before ever touching anything on the mother boards.)  I reassembled the computers.  Then it was time for what my colleague Jessica Olson calls “the smoke test”.  I opened the lid of the new computer (the one that used to be the spare, the one that now contains the SSD drive from the old tired computer).  I tapped the power button.

Would smoke come out of the computer?  Or maybe just a sickening crackling sound and a flicker of light on the screen followed by dead silence?

Or, far worse, would the screen load up seemingly normally, followed by a cheerful Mister Paper Clip inviting me to select my country and my language for my brand-new installation of Windows 10?  That would be perhaps the worst thing to see, far worse than smoke or crackling sounds or dead silence.

The only differences being …

And the entire downtime was around ten minutes.

My colleague Aileen Law had a comment to make when she heard just now from me about this “keep a spare identical computer around” approach and about this successful SSD drive swap.  She pointed out that there are people who, when they find a pair of shoes that they are very happy with, will make a special point of going back to the store to get a second identical pair of shoes.

Of course at this point I no longer have an identical spare computer any more to use for a swap like this in the future.  This particular computer stopped being manufactured three years ago, so I cannot purchase yet another identical spare machine now.  But at this point I would not want to do that anyway.  By then, the technology will have improved, batteries will have come to have longer lives, SSD drives will be much bigger and less expensive, and the computer will anyway have some feature that washes the windows of your house or connects to all possible bands of all possible 5G networks.

The point about the next computer migration being that as of now, when some day I find that I have no choice but to migrate away from this computer, I will face the two lost weekends.  But maybe if I am super lucky, that will be a few years from now.

8 thoughts on “A fresh computer with no migration cost”