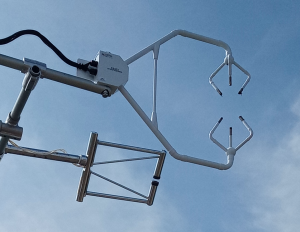 Recently I happened upon a weather station with a couple of interesting-looking air sensors.  What do they sense?  It’s easy of course to work out what the white one (upper right) is sensing.  But the one in the lower center, metallic colored — what is it sensing?

As I say, the white one is super easy to work out.  Clearly it emits something or another in three axes and senses something or another in those three axes, and then does a three-equations-and-three-unknowns thing to work out wind speed and wind direction.  A first elegant thing about this sensor is that it has no moving parts, thus differing from the traditional rotating-cups anemometer and rotating weather vane.  A second elegant thing about that sensor is that it works out wind direction as a vector in three-space rather than the two-space of a traditional rotating weather vane.  As such it can tell you if there is an updraft or downdraft in addition to telling you the compass bearing of air flow.

Clicking around on the Internet reveals that with this sensor, what is emitted is ultrasonic clicks and the arrival time of each click at its coaxially paired sensor is what gets measured.  If the arrival time is a bit sooner or later than expected, then the wind was toward the sensor or away from it respectively.  The device does its clicks dozens of times per second, and I’d guess it probably does a round-robin clicking sequentially in the three emitters so that no two emitters click at the exact same time (because then maybe this would confuse the sensors).

Which then leaves us with the other sensor in the lower center, the metallic colored sensor.  What is it sensing?  I don’t know and I am hoping that some loyal blog reader can tell me.  I can make guesses about it.

We see two rather chunky coaxial cylinders, facing each other, with a fairly small gap between the faces.  One sensing approach would be the use of visible light.  We put a white-light LED emitter in one face and several wavelength-specific sensors in the other face.  With this we can figure out if there is fog (visible water vapor) in the air.  We can also measure dust or other particulates, sorting by color.  Why the large diameter cylinders?  Why not the rather thin tubes as in the white sensor.  The answer if indeed this is a visible-light approach is of course that we can detect even extremely small concentrations of water vapor or dust or other particulates so long as we use scattering rather than coaxially aligned emitter-sensor pairs.  If we make the emitter and sensor coaxial, there has to be really pretty substantial thickness in the air to absorb enough light to permit sensing.  On the other hand if we use scattering, meaning that we very intentionally do not align the emitter and sensor, then even very thin concentrations of dust or water vapor can be detected.  This would explain the diameter of the cylinders.   You need some diameter available in the housing to be able to tilt the emitter and sensor so that they are not pointed at each other.

The wavelength-specific sensors would permit discerning between smoke particles or dust or water vapor.

But I sort of wish the sensor could be super fancy, for example a mass spectrometer.  This would permit sensing the elemental content of the dust.  Does it have sulfur in it?  Carbon black?  Mineral-type dust?  Maybe some loyal reader who knows all about mass spectrometry can say whether, if you throw enough money at it, you can fit the entirety of a mass spectrometer into two cylinders each a little bit bigger than your thumb.  I’d guess not.

« Free webinar: Learn about DAS and Designs
A refreshing corporate response to the recent health and economic challenge »

2 thoughts on “What is it sensing?”