(Update:  it took more than six months from when we reported the bug, but USPTO did finally fix it.  See blog article.)

When you are e-filing a new utility patent application in EFS-Web, one of the ways to make the priority claim is by means of a web-based Application Data Sheet.  There’s a place in EFS-Web where you can say that you are adding a priority claim, and it gives you a drop-down menu of patent offices where your priority application might have been filed.

USPTO has had users alpha-testing and beta-testing its new system called Patentcenter, which will eventually replace EFS-Web.  Patentcenter has a similar web-based ADS function that allows you to make a priority claim when you are filing a new patent application.  When you use this function, eventually you reach this drop-down menu of patent offices where your priority application might have been filed.  Can you guess which well-known foreign patent office is missing from this drop-down list in Patentcenter? 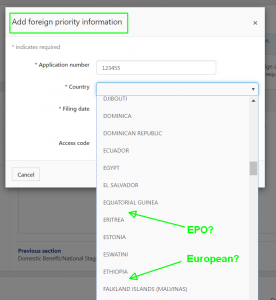 I am astonished to tell you that the European Patent Office is missing from this drop-down list in Patentcenter.

I’d guess that of all of the foreign patent offices from which US filers claim priority, EPO is at or very near the top of the list.  So it is mind-boggling that USPTO would have forgotten to include EPO among the choices on this drop-down list.

I ran into this problem with Patentcenter about six months ago, and I reported it to the EBC.  The EBC “opened a ticket”.  It has been six months and I have never heard back about that ticket.

About three months ago I called up the EBC and reported this problem again.  The EBC “opened a ticket” a second time.  I have never heard back in response to that ticket either.

And indeed as of earlier today, EPO was still missing from this drop-down list in the “add foreign priority” section of the web-based ADS in Patentcenter.  You can see this in the screen shot at right.

It will be interesting to see how many days pass between the date of this blog article and the date that USPTO adds EPO to this drop-down list.  (This is trouble ticket number CP9.)