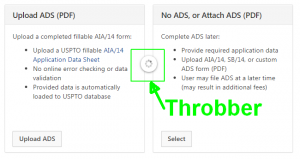 I bet I got your attention with that title!  Nope, I think it is extremely unlikely that whatever the title made you think of has anything at all to do with the feature of USPTO’s Patentcenter that this article is going to talk about. 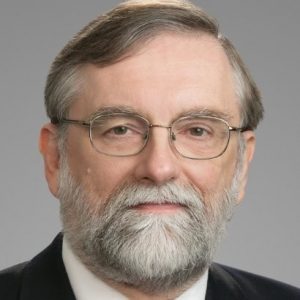 As diligent readers of this blog know, beta-test users of USPTO’s Patentcenter have a listserv dedicated to efforts to make sense of and fix and improve the Patentcenter system.  Among other things, the listserv maintains a feature request page and a trouble ticket page and (it is only fair!) a page listing things about Patentcenter that are an improvement over the legacy EFS-Web and PAIR systems.  The efforts of the listserv group are able to move forward only because of enormous amounts of volunteer time and energy.  One of these people is Richard Schafer (photo at right), who volunteered to take each of the trouble ticket items and post it into USPTO’s Ideascale system.

The hourglass (the sort of wheel thingy) remains in view and keeps spinning long after the requested action has actually finished. 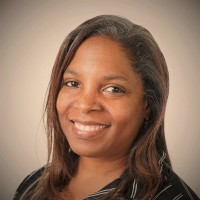 But I was not the person who had articulated this Patentscale problem in the first place — that contribution came from listserv volunteer Dai Phipps (photo at right).  The way she had described it to me in a private email was:

Working wheel continues to randomly appear after requested action has been completed.

All of this offers a reminder of how difficult sometimes it can be to use words to communicate things in life that are inherently nonverbal.  So anyway what brought this topic to the foreground, as I say, was that Richard was trying to post each Patentcenter trouble ticket, one by one, into USPTO’s Ideascale system.  And he had worked his way down to ticket number CP11, the ticket in which I talked about “the hourglass” and my way of explaining it further was to call it “the sort of wheel thingy”.  And this is the thing that Dai had called the “working wheel”.  Anyway, Richard read what I had written and he was not at all sure what I meant.  And he wrote to me to ask just what I meant.  So I realized there was no choice about it — I was going to have to click around on the Internet and try to find out what the actual geek term is for this thing that Dai and I were talking about.  And that’s how we got to the title of this blog article.

It turns out that what Dai was talking about — the thing that the Patentcenter designers are not using correctly — is called a “throbber”.  Here is the Wikipedia article about throbbers.  Here is an image of a throbber:

When you see a throbber, if you are like most of us, your reaction almost subliminal.  Yes!  Admit it!  The very instant that this thing showed up on your screen, just above this sentence, your reptile brain reacted with a sort of “hey wait something is happening I need to stop and wait until it finishes”.  Right?  That is exactly how your brain reacted.

And then admit it even more.  Even after you read this sentence, and the previous four sentences, isn’t true that the rotating circle up there is even now causing your reptile brain to react with a sort of “pause” instinct?  Even though I just now used words to communicate to your frontal cortex that the rotating circle above is only a portrayal of a throbber and is not really an actual throbber, admit it even more.  Even now, your reptile brain is reacting to the peripheral vision in your visual cortex to the rotating throbber image, with a sort of “pause” instinct.  It does not matter how hard you try on a conscious level, your subliminal reaction is impossible to completely turn off.

Yes even now three paragraphs later your peripheral vision is still tracking that rotating circle and on a barely conscious level your reptile brain is sort of “pausing”.  It’s true isn’t it?

Dear reader, please scroll back up so that once again you can see that animated GIF image of that rotating circle.  Admit it!  We have been talking about this for four paragraphs now, and if there were ever a dead horse that had been beaten to death, it is my explaining in words, logically to you, that what appears above is a mere image of a throbber, not an actual throbber, and yet even now if you allow that rotating circle to stray into your peripheral vision, let alone into your central vision … isn’t it true that you cannot quite shake a visceral feeling that “something is not quite done happening”?

Given that in 2020 we are all essentially subliminally programmed to react in this way to throbbers, we can now appreciate the extremely bad thing that goes on in Patentcenter.  What happens is that through some programming mistake, the designers of Patentcenter have made it so that all too often, the throbber keeps moving even long after the requested activity actually completed.

Unfortunately this particular misbehavior of Patentcenter is random.  So it is very difficult to reliably demonstrate it.  But it happens many times per day for anyone who makes regular use of Patentcenter.  Put plainly, it violates trust.  It is an in-your-face reminder that the system that you are using is obviously not yet ready for prime time.  Patentcenter clearly does not scale well.  Patentcenter clearly is made up of a seemingly unified front end that is visible to the user, with probably dozens of engines in back, and what we realize is that the engines don’t talk to each other reliably.  A first engine inside Patentcenter, a first engine that users can’t see, is the engine that says “turn on the throbber because the user just clicked this particular link.”  And then there is a second engine inside Patentcenter, a second engine that users can’t see, that actually does whatever it is that the user wanted, like receiving a credit card payment or uploading a file or filing a patent application or sorting a list or searching a database.  And then there is a third engine inside Patentcenter, a third engine that users can’t see, that is supposed to say “turn the throbber off now because we did finish the task”.  And the problem is that the second engine and the third engine are randomly failing to talk to each other.  This might be because the third engine is poorly dimensioned and does not scale well for the number of users and sometimes misses the arrival of incoming messages.  This might be because the communications path from the second engine to the third engine has a bottleneck somewhere.

Or maybe the designers of Patentcenter made design decisions so that the second engine is using UDP packets as the way to notify the third engine that it finished the task, and the designers failed to design in any higher-level “ack” mechanism to check to make sure the notifications actually arrived, and then inevitably sometimes the UDP packet is a casualty of an ethernet packet collision.  (UDP is a “best efforts” protocol and if a UDP packet gets lost, there is nothing at that ISO layer to notice that it got lost.  A responsible system designer must think about what the consequences would be of loss of any particular UDP packet, and if it really matters, the system designer who has selected UDP simply must design in some higher-level “ack” mechanism, or otherwise must start over and use instead some other protocol such as TCP that already has an “ack” mechanism built in.)

Anyway, somebody got something very subtle but very wrong in the design of this aspect of Patentcenter, because randomly, the throbbers last far too long.  As a regular Patentcenter user, I have sometimes seen throbbers last forever.  By this I mean, sometimes I just find I have no choice after five or ten minutes but to give up and close the browser window, to make the Patentcenter throbber go away.

And this is really a very very serious problem.  As I say this is almost subliminal.  For those who regularly use computer systems in the year 2020, this reaction to a throbber is deep down inside a person’s reptile brain.  The system designer who fails to turn a throbber off when the requested task has finished is really creating a very fundamental lack-of-trust problem for the user.  It absolutely needs to get fixed.

This bug got reported to eMod@uspto.gov on April 30, 2020.  All of May has gone by, and all of June has gone by.  And still this bug has not gotten fixed.  Let’s hope that the Patentcenter people at USPTO get it fixed soon.