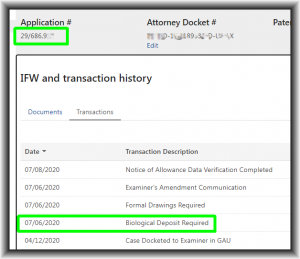 Here’s a nice thing to smile about over your morning caffeine fix.

Like many loyal readers of this blog, we at OPLF check the status of our cases in Patentcenter (or, in the old days, in PAIR) every day or so on general principles.  It lets us know for example if an Office Action is imminent or if an Allowance is imminent.

Just now our daily status check revealed this case in our docket, in which the status is “allowed, Notice of Allowance not yet mailed”.  This means the Examiner has allowed the case, but we have not yet received the Notice of Allowance.  So let’s see how alert you are at this time of the morning.  What’s very much out of the ordinary about this transaction history in this “allowed case”?  Well, the answer is in the title of the blog post, so you probably already knew where I was going with this one.

Yes as you can see from the series code of the application number, this is a US design patent application.  (Without revealing too much I’ll tell you that this design application is directed is a consumer electronic device.)  We knew the case was likely to be allowed because a couple of weeks ago the Examiner had phoned us up to make a telephone election to a restriction requirement.  So it was not at all a surprise to see today that the case has been allowed.  Somebody at the USPTO has set a flag in the USPTO database saying “Formal Drawings Required” which makes perfect sense;  the election is to particular figures, so those figures will need to be renumbered starting with figure 1.

But as you can see here, somebody at the USPTO has also set a flag in the USPTO database saying “Biological Deposit Required”.  That’s the part that makes me smile.  Normally such a requirement would only be imposed if the subject matter of the patent application were along the lines of bacteria, fungi, algae, protozoa, eukaryotic cells, cell lines, hybridomas, plasmids, viruses, plant tissue cells, lichens or seeds.  Again without revealing too much, I will say that the sole claim in this application is:

The ornamental design for a <consumer electronic device> as shown and described.

It will be interesting to see what happens in this particular case.  Maybe when we pay the Issue Fee, somebody at the USPTO will notice that it is out of the ordinary to impose a biological deposit requirement in a design patent application.  Maybe at that point, somebody will clear that flag, and then maybe we will not receive the Notice of Abandonment.

Maybe you have had a similar situation in one of your cases.  If so, please post a comment below.

3 thoughts on “A Budapest Treaty deposit requirement in an industrial design case!?”