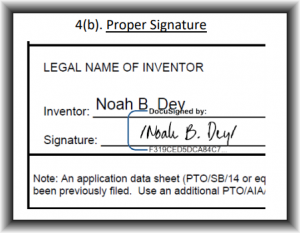 On about June 9, 2020, the USPTO quietly decided to accept more kinds of e-signatures in addition to the well-known “virgule” signature.

Prior to September 21, 2004, the only signature USPTO was willing to recognize was a legacy handwritten pen-and-ink signature.  In 2004 the USPTO carried out a rulemaking (69 FR 56481) that took effect on September 21, 2004.  The rulemaking amended 37 CFR § 1.4 (“Rule 4”) to add a second permitted kind of signature namely the virgule (“slash”) signature.  On October 27, 2004 the USPTO published a guidance document entitled “S-Signature Examples” which was intended to help USPTO people distinguish between e-signatures that the USPTO considers to be Rule-4 compliant and would-be e-signatures that USPTO considers to be non-compliant.

During the years from 2004 to 2013, USPTO has consistently bounced documents that had been e-signed in any way other than USPTO’s self-designed virgule style of e-signature.  (And it has often bounced documents that have been e-signed compliantly with Rule 4;  for example my e-signature is “/s/” which fully complies with Rule 4 but USPTO clerks often bounce documents e-signed that way.  And Patentcenter bounces that e-signature despite its being Rule-4 compliant (trouble ticket CP29)).

And so things have stood from 2013 to the present day.  USPTO’s unwillingness to recognize an e-signature carried out by any means other than USPTO’s own self-devised e-signature format, or the graphically inserted replica of a pen-and-ink signature, has been a point of contention in recent years for people within client corporations who are accustomed to being able to e-sign documents using platforms such as paid-for Acrobat and Docusign.  For many years now, USPTO’s position has consistently been that an e-signature carried out by any means other than the virgule procedure set forth in Rule 4 or the replica signature is not a signature at all.

But not any longer.  On about June 9, 2020 the USPTO quietly revised its guidance document “S-Signature Examples” to list several more permitted e-signature formats.  You can see the new document on the USPTO web site here and you can see it archived here.  As you may see at pages 5 through 9 of the guidance document, the USPTO now permits the use of systems such as Docusign and paid-for Acrobat to e-sign documents for e-filing at the USPTO.  Newly permitted e-signature formats include the Docusign example quoted above. 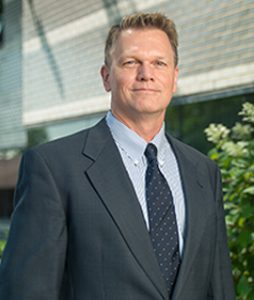 I leave it to the reader to consider whether a mere revision of this guidance document is in fact legally effective, or whether an amendment to Rule 4 pursuant to the Administrative Procedure Act would actually be required to bring about such a result.