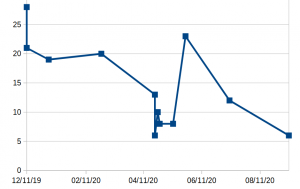 We are all in the habit of telling our clients that once we pay an Issue Fee, we can expect that it might take the USPTO around six weeks (around 42 days) to issue a patent.  One might speculate that the disruptions of work-from-home in the year 2020 would lead to situations where recurring tasks at the USPTO would take longer than usual.   Maybe the average interval between payment of Issue Fee and issuance would, during these challenging times, be observed to grow longer than 42 days?

But at least in this narrow area, the USPTO seems to be carrying out a particular recurring task somewhat faster than usual.  I will explain.

Here we see how it went in the Issue Branch for a dozen of our recently issued US design patents.  (I tossed out one outlying data point where it took 120 days for a design patent to issue;  the inordinate delay in that case was due to factors outside of the control of the Issue Branch.)

The third column is the most interesting column.  It tells us how many days passed between the payment of the Issue Fee and the mailing of the Issue Notification.  For these dozen cases, that interval averaged 14½ days.  This is the interval within which the Issue Fee payment is “verified” and within which FDC (final data capture) takes place.  Astonishingly in two cases it took a mere six days for the Issue Branch to carry out the entirety of the Issue Fee verification and the final data capture.  This third column is what I plotted in the graph at the top of the article.  The line in the graph looks jagged, but the main point of the graph is that all of these numbers are small numbers.  The numbers average 14½ and two of the numbers are a mere 6.

Now let’s take a look at half a dozen of our recently issued US utility patents.

(For this table I also tossed out one outlying data point — a case with very long delays due to something out of the control of the Issue Branch.)

I had an opportunity to speak by telephone a few weeks ago with the woman at the USPTO who manages most of the Final Data Capture process (you know who you are!).  I offered her my observations on the USPTO’s having functioned so well in recent months in this area of Issue Fee verification and FDC, and I asked her to please pass along my compliments to the appropriate people.  She said she would do that.

« What is the protest fee in ISA/US?
The hive mind never sleeps »