Patentcenter is still nominally in beta test, but USPTO seems to be plowing ahead with its plans to force all applicants to e-file patent applications in Microsoft Word format (the Microsoft Word dialect of DOCX) and has long ago stopped any development or feature enhancements for EFS-Web or PAIR.  USPTO has said it will shut down EFS-Web and PAIR and users will have no choice but to use Patentcenter to do the things that have in the past been done through EFS-Web and PAIR.  So what is the progress at the USPTO with fixing the known bugs in Patentcenter?

There is a Patentcenter beta tester user community, tied together by the Patentcenter listserv.  (Interested persons should join that listserv.)  A committee from the listserv met last autumn with some USPTO developers and it was hoped that this might lead to some progress with fixing some of the bugs in Patentcenter.  It was also hoped that USPTO would listen to users and implement some of the enhancements and features requested by users.

About four months ago, it was explored that the committee might meet again with USPTO people to review the bug list and to see what progress USPTO had been made with the bug list.  Some time has passed and the meeting had not yet happened.  So to save time, I have prepared this report that summarizes my best assessment of USPTO’s progress with the bug list.  Maybe some time soon the meeting will be able to take place and there will be an opportunity for further dialog.  In the mean time, this blog article reviews USPTO’s progress in this area.  (Preview:  things look grim.)

In a subsequent blog article I will review USPTO’s progress with the list of requested feature enhancements for Patentcenter.  (Preview:  things look grim in that area as well.)

The executive summary for USPTO’s progress on Patentcenter bug fixes is as follows.

Out of 58 serious bugs reported to USPTO in Patentcenter, the approximate status is:

As for the six bugs that got fixed, the average delay between the bug report and the USPTO fix was 195 days, or just over half a year per bug fix.

The average pendency for an outstanding bug is 342 days.

The detailed results appear in the table below. 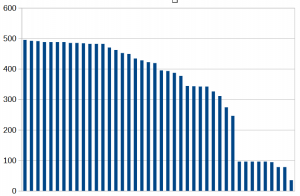 At half a year per bug fix, the bug list would be cleared in about the year 2042.  (That figure assumes of course that no new bugs would get identified during that 21-year period.)