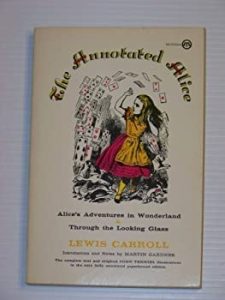 The year was 2001 and semiotics (the study of signs and symbols and their use and interpretations) had by then permeated Western thought, I think mostly because of Umberto Eco’s erudite The Name of the Rose, published in 1980.   I had just gotten done reading a rather baffling book that purported to find layers of meaning in the architecture of Hilton hotels around the world and their (I am not making this up) semiotic significance to the Cold War.  And pulp writer Dan Brown had just embarked on his series of pop novels like Angels & Demons and The Da Vinci Code, each of which would build a whole story arc on the thinnest of semiotic reeds.

Hoping to find some semiotic comfort food, I returned to a book that I had discovered when I was in high school — Martin Gardner’s The Annotated Alice. Gardner, known to most of us as the writer of the “mathematical games” column in Scientific American magazine for over two decades, published The Annotated Alice in 1960.  And in 2001, as I reeled from what seemed to me to be a trying-too-hard effort to link the design of a staircase in the Istanbul Hilton to something about the anti-ballistic missiles in Turkey that had gotten repositioned as part of the winding-down of the Cuban missile crisis, I found the comfort food that I desired.  Gardner’s book was as rich and satisfying for me upon rereading in 2001 as it had been so many years earlier.

In The Annotated Alice, Gardner works his way through Lewis Carroll’s Alice’s Adventures in Wonderland and Through the Looking Glass, meticulously explaining the two books.  Carroll filled each book with double meanings, cultural references, and thought-provoking wordplay.  In his exegesis, Gardner provides many hundreds of footnotes, amounting to half of the words in his book, rewarding the diligent and patient reader with a fuller understanding of the two source books.

If by some chance you have not yet read The Annotated Alice, I commend it to you.  It is a delight to the mind and to the imagination.

5 Replies to “The Annotated Alice”