I’m just headed over to Opera Samfaina for the e-Trademarks listserv reception.  Hope to see everyone there!

Meet the Bloggers XIII was a success!  The reception was on the beach in Barcelona.  The surf crashed on the sand.  Cruise ships and sailboats passed by on the ocean.  Tapas and beverages were consumed.  Over a hundred people attended.

One more event to attend and then you can feel you have accomplished nearly all of your INTA goals.  Yes, the e-Trademarks listserv reception lies ahead, tomorrow (Tuesday) evening.

Hopefully everybody who is in Barcelona for the INTA meeting already has their ribbons to attend the two must-attend receptions:

The weather in Barcelona is delightful just now.  MTB XIII will be at Xup Xup which is a beachfront venue.  The e-Trademarks reception will be at Opera Samfina which is in the middle of La Rambla.

If you only attend two events in Barcelona during the INTA meeting, these are the two events to attend … END_OF_DOCUMENT_TOKEN_TO_BE_REPLACED

The landscape for VPN routers has changed over the years.  As of a few years ago, sophisticated VPN routers with IPSEC were ethernet-only.   END_OF_DOCUMENT_TOKEN_TO_BE_REPLACED 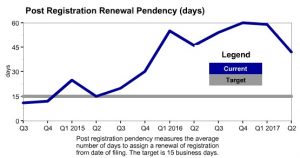 (Updated to include screen shot from USPTO’s dashboard, thanks to Ken Boone.)

The post-registration branch at the USPTO — the group of people whose job it is to look at a six-year renewal or a ten-year renewal — sure is slow sometimes.

We have one where we filed our renewal on March 22, 2017.  The post-reg people accepted it on May 9, 2017 (which is what prompted today’s blog post).  Actually that was only six or seven weeks which was faster than many cases.  We had one recently that took almost five months to get looked at.  We filed the renewal on October 18, 2016 and it did not get looked at until April 4, 2017.

It sure will be good when the USPTO gets the post-reg branch back to normal.

Okay folks here is a chance to win a free digital multimeter.

What prompts this is that I keep hearing a particular music-on-hold (MOH) song on lots of different tech support and customer service systems.  So I figure this song is probably one of the standard royalty-free MOH songs that comes with the Asterisk phone system or something.  You can hear the song here.

To win the prize, post a comment with a link to the web page where this particular MOH song can be downloaded.

At the present time, very few US PCT filers pick ISA/IL.  So this fee increase will not affect very many US PCT filers.

Today the search fee paid by a US filer for the Russian patent office as International Searching Authority increases from $449 to $482.  (I first reported this here on March 17, 2017.)

Filers who use EFS-Web to file in RO/US, or who use PCT-SAFE or ePCT to file in RO/IB, will not need to worry about getting this right.  Each of those e-filing systems has already been updated today to reflect the new fee.