The other day I sent a Section 71 document (a ten-year trademark renewal document) by means of the TEAS system to a foreign client for e-signature.  The next day the TEAS system reported that the document had been e-signed.  All that remained was for me to pay the $100 government fee.  I figured this would be easy.  I figured wrong.  The Financial Manager system made it very difficult.  The Financial Manager system locked my account and it was a lot of trouble getting things working again.  Here are the details:

As I mentioned, the trigger for today’s activity was the email from TEAS telling me the good news that the client had e-signed the renewal document.  I opened the email, clicked on the link, and eventually reached the page that invited me to log in to Financial Manager.

Logging in to Financial Manager is always a big annoyance and a lot of trouble.  A first problem is that even if I already logged in to FM, if the login that I already did was more than fifteen minutes in the past, then the FM system will have forced me to log out without telling me so.  (This fifteen-minute forced logout is a disaster and it broke a promise that USPTO made several years ago, as I blogged here.  USPTO should permit the user to pick how much time passes before the FM system forces the user to log out.  81% of users would use that feature if it were available.)

(Why do administrators of systems like FM force users to pick such long and impossible-to-remember passwords?  It turns out, as I will explain in a later blog article, that such administrators do this because of a lack of confidence in their own ability to appropriately secure a particular data file that contains “hashes” of the passwords.)

A fourth reason that logging in to Financial Manager is always a big annoyance and a lot of trouble is that the designers of FM decided to force each user to change his or her password no less often than once every sixty days.

These unfortunate system design decisions actually make the FM system less secure rather than more secure, for the simple reason that these decisions force the user to write down his or her password and tape it to the computer screen.

I’m not sure how many times I kept trying.  I think it was four times.  And at that point, the FM system locked my ac 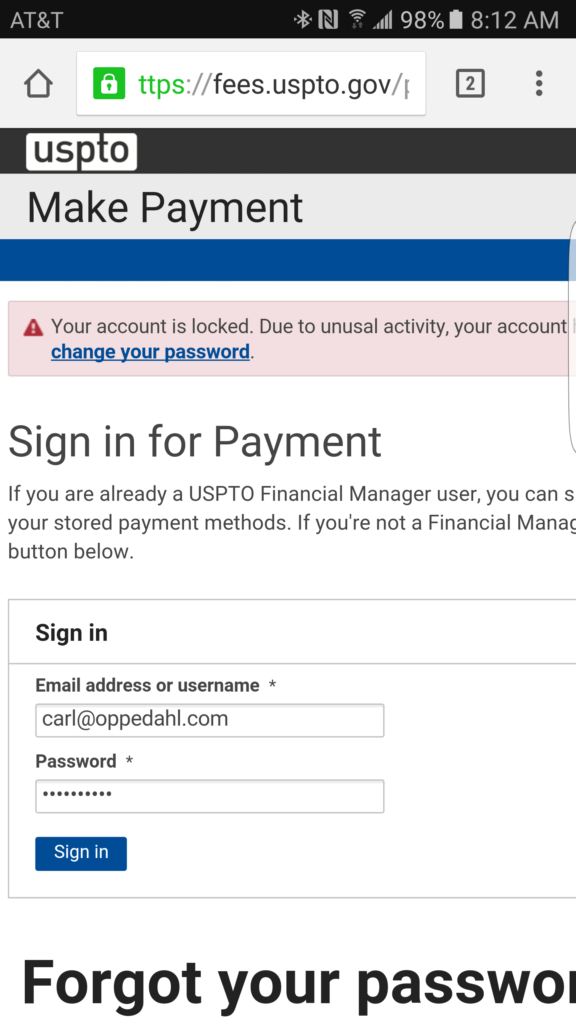 With such polite and nicely designed system, the hapless user will be able to avoid the disruption and unpleasantness of a locked account.  The hapless user (who by definition is not at his or her regular computer screen location) simply places a telephone call to a co-worker to ask him or her to go look at the password taped to the user’s computer screen and read it over the telephone.  Or if the hapless user has noted the password in a computer file somewhere (and by definition is not nearby to that computer), the user can get in a car and go to that computer and open the file and read the password.  These are preventative measures to keep the user account from getting locked.

You can guess where I am going with this.  The FM system is not polite and not nice about this.  It silently keeps its own count of the number of remaining guesses and does not tell the user.  The user then inevitably gets a locked account.

What can the hapless user do when FM has locked the account?  FM tells the user that this is actually no problem.  FM tells the user (as you can see above) simply to click on the link for a “forgotten password” to do a “change password”.  And this procedure would not have to be much of a problem.  The user would click on the “change password” link.  Then the system would send out an email to the user and the email would contain a link that the user clicks on, to pick a new password.  Not a big problem.

So the link to “change password” does not actually go to a screen that lets me change the password.  Instead it goes to this new screen that merely tells me what I already know (FM has locked my account) and tells me to click on a link to “contact customer support”.

Now you might think that when you click on the “customer support” link on the “we locked your account” page, it might take you to a new page that makes it easy to talk with the FM people who are responsible for unlocking user accounts.  But you would be wrong.  When you click on the

link, this is where you end up:

There are several disagreeable things about this situation.  First, of course, is that this means that if the FM people locked your user account, and you had the bad luck that they chose to do it on Saturday or Sunday or a holiday or after 8PM Eastern Time, you are stymied for hours or days, until the next time that this office is open again.

A second disagreeable thing about this situation is that even if you are lucky enough that the time of day that FM picked for locking your user account falls during business hours, it is no easy trick reaching a person who actually can help.  There is a robot attendant that is designed with several goals, including (a) if possible, preventing you from reaching any human being at all, or (b) failing that, preventing you from reaching any upper-level person and confining your options to front-line people.

A third disagreeable thing about this situation is that the robot attendant is designed so that in general you will be unable to guess which combination of button presses would actually get you to someone who could help.  The robot attendant first offers that for help with trademarks, you should press 1.  Well, this problem is a trademark problem.  I am trying to file a trademark renewal.  But I can promise you that if you press 1, you will never reach the right person.  If you press 1, you descend into a place of no escape, filled with things like recorded messages about what a trademark is.

Having learned that pressing 1 is a mistake, I then tried pressing 3 for technical assistance.  The robot then asked what kind of technical assistance I wanted.  The first option was to press 1 for technical assistance with trademarks.  So I pressed 1.  This brought me to a very cheerful person named Dorothy who clearly wanted to be helpful.  She explained that regrettably she could not actually help with my problem but she would transfer me to a different place where I should press 3 and then 4 and then I would reach someone who could help me.

I punched redial on my phone, and then dialed 3 and then 4 (guessing that the previous instructions might work with this telephone number) and Lauren answered.  Her first question was “have you waited fifteen minutes?”  Which made me wonder, if there is some undocumented thing about how the FM account-locking system works that involves waiting fifteen minutes, then maybe the FM people ought to document it somewhere, like maybe on the screen that says “we locked your account”.

I then explained that yes, more than fifteen minutes had passed since the FM system locked my account.  She then said she would have to “escalate the call”.  It turns out that “escalating the call” does not actually mean I get to speak with someone who will help.  She explained that “I will hear back within four hours”.  I figured it meant I would receive a telephone call, but she said no, what would happen next is that within four hours I would receive an email message.

And indeed after some hours I did receive a terse email message telling me that the FM people had unlocked my account.  And indeed I found that I was once again able to log in at FM.

We could try to make a list of all of the things that are nuts about this aspect of FM.  One thing that is nuts about this is that (see above) the FM people refused to just let me reset my password, and demanded instead that I place a telephone call, because “we’ll need to know who you are”.  And yet at no time during any of my telephone calls to the USPTO did anyone do anything to confirm “who I am”.

Anyway I then used the FM system to pay the $100.  The client’s renewal got e-filed.

« What does this triangle do?
Now a second media stick option for the road warrior »