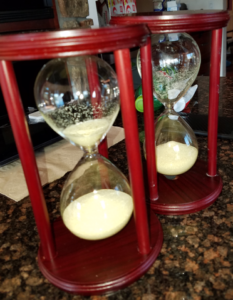 e his earlier books it is a fun, thought-provoking read.  For reasons I will describe, it made me think about hourglasses.  As it turns out, it is not as easy to find a good hourglass as you might think.

I’ve actually met Penn Jillette (and his partner Teller) although there is no reason they would remember me.

For those who don’t know, Penn & Teller is a team of magicians, now in residence in the eponymous theater at the Rio hotel in Las Vegas.  Some thirty years ago they had a run on Broadway in Manhattan.  I was in the audience and I got called up to the stage, along with three other people.  Our job was to watch someone get into a box, and the cover would get slammed into place, and we four audience members would then pass around a cordless drill and use it to screw in some screws which would hold the cover into place.  You can guess what happened next.  The box got opened up again and it was empty.  And the person who had disappeared showed up somewhere else, I don’t recall exactly where.  Maybe somewhere in the audience.  Penn (the one who speaks;  Teller never speaks while on stage but does speak in real life) asked the audience to give the four of us a round of applause and we returned to our seats.

Anyway that was my brief time in the presence of Penn & Teller.  I am pretty sure they would not remember me now.

Something or another got me thinking about these magicians again a few weeks ago, and somehow I learned that Penn has written and published several books, each of which is somewhat autobiographical in nature.  The most recent, Presto, just hit print and I finished it a few days ago.

In Presto, Penn explains some of the things he does to try to accomplish his writing goals.  One thing is that when he sits at his desk, he turns over an hourglass.  (He explains that his hourglass runs for 45 minutes!)  And he writes without interruption until the hourglass runs out.

At which point I began my search for an hourglass.  I figured I would buy two of them, one for the office and one for home, so that if I were in either location I could use it to focus my writing efforts.

And I learned that it is actually not easy at all to find a suitable hourglass.

A first challenge is that many of the companies that manufacture such products seem to miss the “hour” part of the term “hourglass”.  You can find so-called hourglasses that run for 3 minutes, 15 minutes, 30 minutes, or (like Penn’s) 45 minutes.  It turns out to be not easy at all to find an hourglass that is designed to run for one hour.

A second challenge is that many hourglasses are, it seems, manufactured simply to serve as an attractive thing to sit on a shelf or mantle or console table.  The hourglass looks great but does not actually work very well.  In many cases, to its credit, the manufacturer actually admits this, which saves disappointment for someone like me who has a goal of measuring an actual time interval.  In other cases it is necessary to read the reviews to learn that the product does not actually serve its putative function.

A third challenge is that many hourglasses go to the other extreme, offering to measure time reliably but looking extremely functional, for example with a housing of some brightly colored plastic having a color not found in nature.  I was sort of hoping for “all of the above”, namely an hourglass that would keep time (and would actually measure more or less an hour) and would also look somewhat classy.

Yet another potential challenge, depending on the needs of the particular user, is that according to user reviews, some of the hourglasses are not very accurate.  A user might complain for example that their hourglass actually ran out in 58 minutes or 62 minutes.  I was prepared to accept a range of accuracy as wide as ten percent given that my particular application did not require exact timing.

Another factor that might make a small difference is the force of gravity.  I live at an altitude of about 9000 feet, further from the center of the earth than most people.  Maybe the gravity is a little bit weaker at this altitude, in which case maybe the hourglass would run a little slower.  My guess, however, is that this factor is quite small, probably making no perceptible difference.

Finally after surfing around Amazon for quite some time, I picked out one hourglass that looked pretty good, and ordered up two of them.  The hourglasses showed up and had not broken in transit.  But they were made of unfinished wood.  It was some softwood (maybe pine) that was not very smooth to the touch.  I then turned over the two hourglasses to see if they would run out at about the same time.

What happened is this — one of the hourglasses simply stopped.

They are not supposed to do that!

I tapped it a couple of times and eventually it resumed running.

Then the other hourglass stopped.  I tapped it a couple times and it resumed.

To get through the whole hour, each hourglass had to be coaxed at least twice to do its job.

There was no way that either of these hourglasses would serve its actual functional purpose.

So I returned them (fortunately Amazon makes returns easy) and surfed around and eventually found another option.  This hourglass cost more money and had better customer reviews.  The wood was said to be finished in a nice cherry finish.  I ordered up two of them.  The hourglasses showed up and I opened up the shipping box.

You can see them in the photograph above.  One of them had been assembled without the worker having gone to the trouble of actually gluing the three shafts into the top and bottom pieces.  The whole thing sort of fell apart in my hands.  The other one had been glued together but had not been properly clamped during gluing, and when it was done, the top and bottom were not parallel with each other.  Depending on how you looked at it, either it would lean to one side or the top would be tilted.  You might be able to sort of see this in the photograph.

The one that had never been glued, I held it together with rubber bands and tried it out.  If it kept good time maybe I would go to the trouble to try to clue it together.  But no, it stopped twice along the way of measuring an hour.  Twice I had to tap it to get it to keep running.  The other one also stopped from time to time.  You may actually be able to make this out in the photograph above.

So I also had to return these hourglasses.

I have now ordered a couple more hourglasses.  Each time I go through this process, the hourglasses get more expensive.  These hourglasses are really pretty expensive.  But maybe they will work well enough that I will not feel compelled to return them.  They will arrive next week and if there is news, I will post it here.

4 Replies to “Finding a good hourglass”