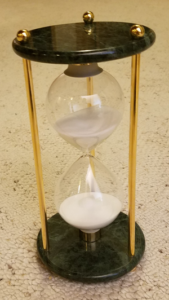 I think I can now declare victory, but it was a long road.

Loyal readers will recall my lamenting that many “hourglasses” actually ran for 15 minutes or 30 minutes and not an hour.

They will recall my lament that some hourglasses would simply stop running part way through the hour.  I would find it necessary to tap the hourglass several times to get it moving again.  And then there were some hourglasses which actually did not keep time at all but were merely meant to look nice (and the sellers varied in their candor about this).

Finally I worked my way up to the hourglass at right.  It cost quite a bit of money but was worth it.  It actually ran the whole time, not requiring tapping to get it to resume keeping time.

All along I had been planning (or at least hoping) to get two hourglasses, one for my firm office and one for my home office.  The idea was that it would hopefully help me focus on a writing task for an hour.  Hopefully this would get me closer to finishing one or another of the several books that I am working on.

So having found one good one, I tried to reorder it.  Amazon said sorry, the vendor who sold this hourglass to me no longer had it in stock.  But I could get it from any of several other sellers.  So I picked another seller.  The package arrived a few days later, and without even opening the box I knew I was in trouble.  There was a rattle of broken glass in the box and a very fine sand was leaking out of one of the seams of the box.  I returned it.  I ordered a third one.  What showed up did not look anything like what was in the photograph.  I returned it.  I ordered a fourth one.  It showed up and it is working fine.

So now we shall see what happens.  Maybe soon I will complete one of my books-in-progress!

I have several books each maybe ⅔ completed, including:

If any of these topics will be of interest to you, please post a comment below.  Maybe if several people ask for the same book to be completed, this will motivate me to get it done!