Our “contacts” page for Oppedahl Patent Law Firm LLC lists some “iNum” telephone numbers.  Should you use those numbers?  The short answer is yes, you should use them if you find that you can call them for free.  And if you are located outside of the US, you might find that it will be cheaper for you to dial one of our iNum numbers than to dial our old-fashioned North American Numbering Plan (NANP) numbers.

What follows is an astonishingly long and rambling answer to this question.

And these answers of “no” and “no” and “yes” are so automatic that we don’t even think of these as questions that anyone would trouble themselves to ask.  Yet it was not so very long ago that the answers were exactly the opposite (“yes” and “yes” and “no”).  If you are old enough, you may recall that in the early days of email (around the late 1970s and early 1980s) it was commonplace for email service providers to fail to interconnect, or to interconnect only for a price per message.

My first email address, which I received in about 1981, was “70146,1646”.  This email address was provided by Compuserve.  It was only after eight years (in 1989) that it became possible for people outside of Compuserve to send email to me using an email address of 70146.1646@compuserve.com.  In 1981 a person seeking to be well connected by email had no choice but to get email addresses from multiple providers so that a would-be sender of email could use an email address from the same provider.  For example in 1981 the only people who could send email to me at 70146,1646 were people having service from Compuserve.  During this time I also had an email address provided by MCIMail (I do not recall my email address with MCIMail but I think it was three numerical digits and a hyphen and four numerical digits, like 123-4567.)  In the early years it actually did cost money to send and receive messages via MCIMail.  Others in the US in the early 1980s used The Source or Prodigy to send email to and from each other.  In the early 1980s, people in France used Minitel to send each other messages.

Each email provider in those days connected you only to other people who used the same provider.  A well connected person might have a business card listing a Compuserve address and a Prodigy address, for example.  Each company hoped, in vain, to become the main or the only provider of email in the world.  By the late 1980s, all email providers surrendered to the inevitability of Internet-based email with what is by now the “at” sign in the middle of each email address.  And eventually the way it worked out is that no company had the market power to be able to maintain prices higher than “zero” for the sending or receiving of email messages.

Nowadays we have the Public Switched Telephone Network (PSTN) which is a world of country codes, city codes, and telephone numbers, and we are accustomed to the notion that it often costs money for one person to place a telephone call to another person.  The “cost per minute” for a telephone call from one city to another, or from one country to another, has historical origins in the non-zero cost for dedicated analog “talk paths” from one place to another, whether delivered by means of copper wire pairs or satellite links or expensive undersea cables.

Slowly, slowly, the PSTN is being absorbed into the Internet, through Voice over IP connections.  Our office, for example, connects to the PSTN via VOIP as I describe here.  Every incoming or outgoing telephone call for our office connects by nothing more than streams of ones and zeroes on our Internet connection.  Most of our incoming and outgoing telephone calls are so low in “cost per minute” that we think of the calls, even to foreign countries, as being basically nearly free of charge.  VOIP makes it possible (see blog article) for Dulles airport to give free telephone calls to anywhere in the US for anyone in the airport.

Just as the early pre-Internet online systems such as Compuserve and Minitel gradually gave up and interconnected for free through the Internet, very very slowly the PSTN is being dragged kicking and screaming into the Internet and “costs per minute” are being driven down closer and closer to zero.  These changes help to explain why at Oppedahl Patent Law Firm LLC our landline telephone lines (such as our main telephone number +1 303 252 8800) used to cost $40 per month and now cost 85¢ per month.

What probably ought to happen, but has not yet happened, is that nearly all telephone calls from anywhere to anywhere else should have a “cost per minute” of very close to zero, the exceptions being calls to and from difficult-to-reach places like Antarctica, and calls on Iridium telephones. 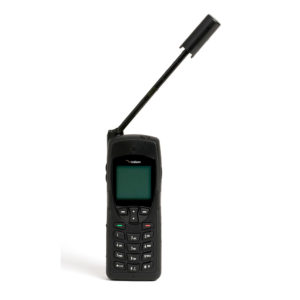 We sort of vaguely appreciate that an Iridium telephone call (see typical phone at right) will have a substantial “cost per minute” given that the telephone instrument is a satellite base station and the call passes through an expensive satellite.

But I put it to the reader that within a few years most telephone calls to and from most places will gradually approach a “cost per minute” of zero.  The trend has begun and will continue.  The reason for this is that more and more of the PSTN is made of pure ones and zeroes rather than legacy copper wire pairs and physical landline telephone lines.

Some telephone calls literally do have a “cost per minute” of zero.  Any two companies that both use VOIP.MS as their telephone carrier can call each other for free, no matter where in the world they are located.  (Our firm uses VOIP.MS for most of our telephone connections.)

As a particular example, the founders of many of the young and scrappy VOIP service providers around the world tend to have a view of the PSTN that includes an inclination to bypass the world of legacy high-cost-per-minute telephone companies and legacy physical copper-wire-pair landlines.  Such young and scrappy VOIP service providers are among those who make it inexpensive or free to dial an iNum telephone number.

My main point in this blog article is to suggest to you that no matter where you are located in the world, no matter what country you are in, your corporation or law firm or government agency might right now be using a VOIP service provider for your outgoing telephone calls, a service provider that chooses to make it inexpensive or free to dial iNum telephone numbers.  Which brings me around to the particular point of this blog article, namely that our “contacts” page for Oppedahl Patent Law Firm LLC lists some “iNum” telephone numbers (numbers in the country code 883 and city code 5100) in addition to more conventional telephone numbers in country code 1 (North America).  Such a telephone number might be a free call for you, even if you are not located in North America.

Should you use the iNum telephone numbers?  The answer is “it depends”.

On a particular day at a particular time you might get widely different results in an attempt to dial an iNum number, depending upon whether you are calling from your office, from your home landline, or from your mobile phone.

The result when dialing from a mobile phone in a particular country might be widely different depending upon the particular mobile telephone carrier being used.

What exactly is an “iNum” telephone number?  You can read about the iNum initiative here (main web site) and here (Wikipedia article).

If you feel like an adventure, maybe you will want to try dialing one or more of these iNum numbers:

3 thoughts on “Should you use our iNum telephone numbers?”