(Note:  This is Feature Request FR9.)

(Update:  I watered down the “ask” as you can see at the end of the blog post.)

Everybody in every intellectual property office provides permalinks.  Everybody except the PAIR developers at USPTO, that is.  This is USPTO’s chance to be in harmony with everybody else and provide permalinks in Patentcenter, as I will explain.

First, what’s a permalink?  A permalink is a URL that works now and works tomorrow and works six months from now.  It’s a deep link to whatever it is that you want to see again or you want someone else to be able to see.  The best permalinks are “constructable” meaning that you can look at it and you can easily see how to make it the way you want it to be.  You can paste a permalink into your intranet, you can paste it into your docket system, you can email it to a client, you can bookmark it in your web browser.  It will work a year from now.

Permalinks are everywhere.  Here are a few examples:

All but one of these examples also does the right thing by providing “https”.  (USPTO is a bit of a laggard, and needs to implement “https” in its full-text patent database.  I reported this problem on August 14, 2014 and USPTO has still not corrected it.)

USPTO needs to get this right in Patentcenter.  USPTO needs to provide permalinks for individual patent application files in the user’s workbench. 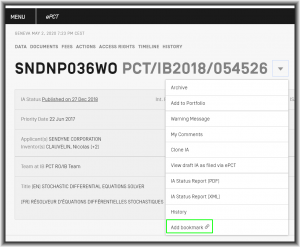 As usual, this is a thing that WIPO got right.  USPTO needs merely to look to see how WIPO did it in ePCT, and emulate WIPO on this in Patentscope.  You can see how it works in the screenshot at right.  You find an application file that you care about, and click on “add bookmark”.  This gives you … wait for it … a permalink!  For this particular application the permalink is https://pct.wipo.int/ePCT/private/iaSearch.xhtml?faces-redirect=true&iaNo=PCT/IB2018/054526&fillingDt=20180620# .

What about the fact that many applications in Patentcenter are not yet published?  Doesn’t this mean that it’s impossible to make a permalink work for such an application?  Nope.  WIPO nailed this one too.  If I make an ePCT permalink for a not-yet-published PCT application, and email the link to somebody, they can click on it.  What will appear on their screen is a place to enter their ePCT login user ID and password, and then a place to do their two-factor authentication, at which point they will be fully logged in to ePCT.  And then guess what happens.  Can you guess?  Yes, ePCT remembers which PCT application was in that permalink!  And assuming that the person has access rights to that PCT application, that particular PCT application will open on the user’s screen!

This is what USPTO should do in Patentcenter.

And yes, back in September of 2018, during alpha testing of Patentcenter, I asked USPTO to please provide this feature.  And USPTO has not yet provided this feature.

(Here’s the update on May 3, 2020.)  Alert reader Chad Gilles posted a reply (you can see it below) that got me thinking.  I had been assuming that the explanation for a lack of permalinks in Patentcenter was merely Hanlon’s razor.   I had been assuming that the lack of permalinks was just the usual USPTO failing to act on 90% of the suggestions about deficiencies in the alpha version of Patentcenter from the alpha testers such as myself.

But he got me thinking that maybe the failure to provide permalinks in Patentcenter had been an actual conscious decision by the USPTO developers, a decision that would of course be very much actively bad for fee-paying customers of the USPTO but would permit the developers to postpone or maybe never have to fully face the pesky and unpleasant business of having to design systems that scale well.

We saw a very clear example of this kind of anti-paying-customer decisionmaking with Private PAIR a few months ago, when USPTO decided to change Private PAIR so that a paying customer who is logged in at Private PAIR can no longer see any applications other than the applications in that customer’s own Private PAIR workbench.  And USPTO’s reason for doing this, never openly stated, was apparently that some tiny number of logged-in Private-PAIR users were using Private PAIR as a way to do XML data mining across the entire body of published US patent applications.  And rather than design a system that would scale well to deal with actual demand, or design a response that would appropriately throttle these rare-use-case abuses while permitting legitimate uses to continue normally, USPTO’s way of dealing with it was to cut off a feature for all of the users, including all of the ordinary legitimate paying customers, so as to deny it from the tiny number of abusing users.

So I suppose the only way to get USPTO to actually consider this “ask” for permalinks in Patentcenter is to water it down from the beginning.  Maybe the “ask” is that the permalink works with normal response time for a logged-in Patentcenter user if the link is pointing to an application in that user’s Patentcenter workbench.  And in other cases, let the USPTO do any of the things that it does instead of designing systems that scale well — let the USPTO force the person who clicked on the link to answer a captcha, or let the USPTO throttle the response so that it takes 30 seconds to load, or something like that.  Or that if they do more than 100 lookups in an hour, their IP address gets shut out for the next 24 hours, or whatever other things USPTO has devised to block data mining.

Oh and once again, note that with ePCT, somehow the WIPO folks managed to figure out how to do permalinks in a database of active patent applications.  And (this is the important part) the sky did not fall.  So probably what needs to happen is the USPTO folks could ask the WIPO folks how they did it.